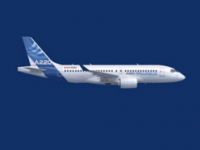 I'm an avgeek who lives in Greece and loves the A220. Ya that's basically all you need to know about me