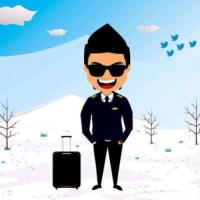 My name is Revan Amadeus, I am the Group CEO of Amadeus that oversee a number of airlines under Amadeus brand. We at Amadeus work around the clock around the globe to make sure all of our passengers arrive at their destination safely on time with most convenient way.
&nbsp;
&nbsp;
&nbsp;

&nbsp;
&nbsp;
&nbsp;
Our IOSA certification is proof of our commitment to highest safety standard in term of airline operation. Our 5-star rating from SkyTrax is recognition to our dedication in service excellence. Green Dot Award is simply our gesture of responsibility toward the environment. But all of these accolades do not mean anything if you, our valued passengers, is not experiencing our promise in reality.

We would like to thank you our former executives for the service they rendered to Amadeus Group during their tenure.

Amadeus Group is continuously looking for talented Airline Executive to join our fabulous management team. At Amadeus, we play big and fly high, having fun in our throne in the sky. Join today by contacting one of the active executive above. Fly with us and conquer the world!