25 replies to this topic

Voando is a Spanish LCC headquartered in  A Coruña Airport, with bases in Gran Canaria, Tenerife South, A Coruña, Palma de Mallorca, Málaga with Madrid and Barcelona serving as focus cities. Founded in 1996, it has since then connected Europe, Africa and North America to many Spanish holiday destinations. It is currently operating 54 Airbus A319s, 95 Airbus A320ceos, 20 Airbus A320neos, 30 Airbus A321ceo, and 20 Airbus A321neo, split between the base A321neo and the A321LR. 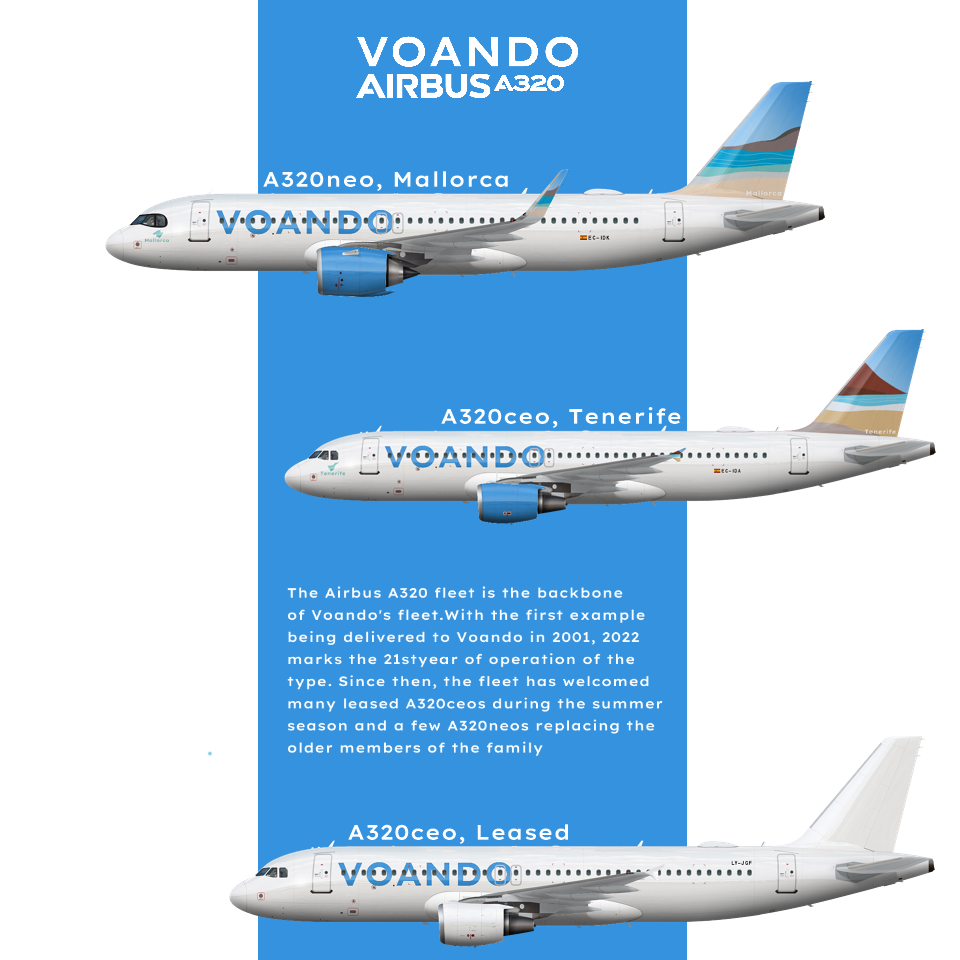 Panama Airways is a low-cost carrier based in Panama City. The airline was founded in 2016 by several friends that wanted to create an airline with cheap fares in Panama. The airline currently operates 12 A320NEOs. 4 in each color. With Blue standing for the beautiful Caribbean, green for the tropical rainforests of Panama, and orange for the rising sun. The airline also flies to over 20 destinations in the Caribbean and up to the US and down to South America. In 2020, the airline saw some problems with demand to the Caribbean dropping due to covid-19. But the airline survived and the airline is now growing and even planning to add routes to more destinations and more aircraft in the fleet. 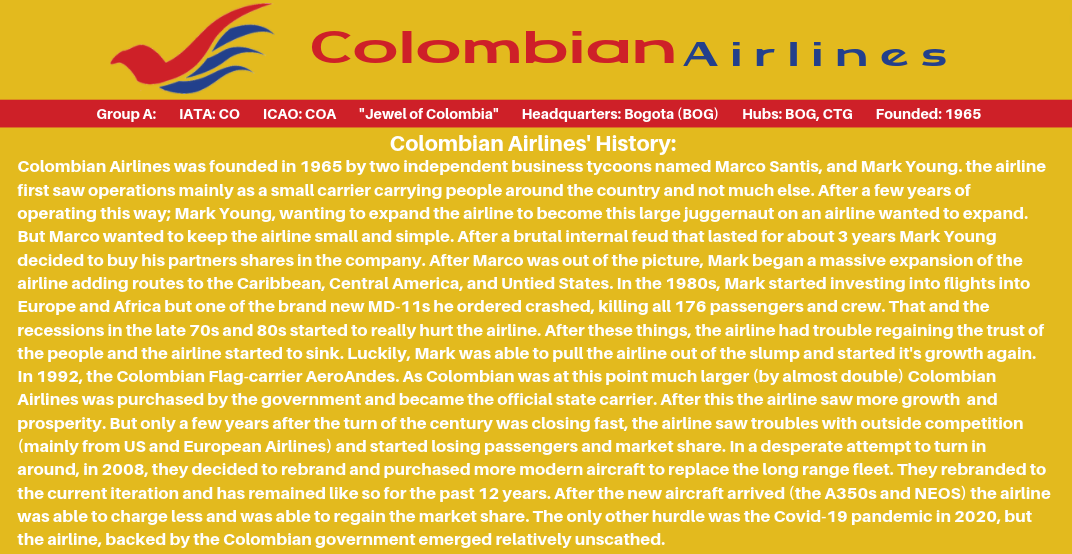 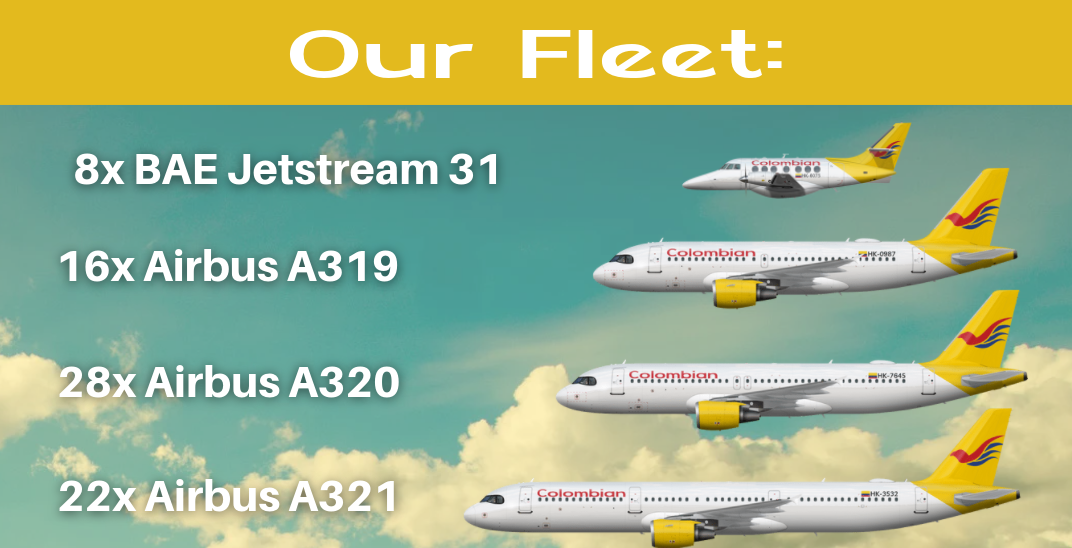 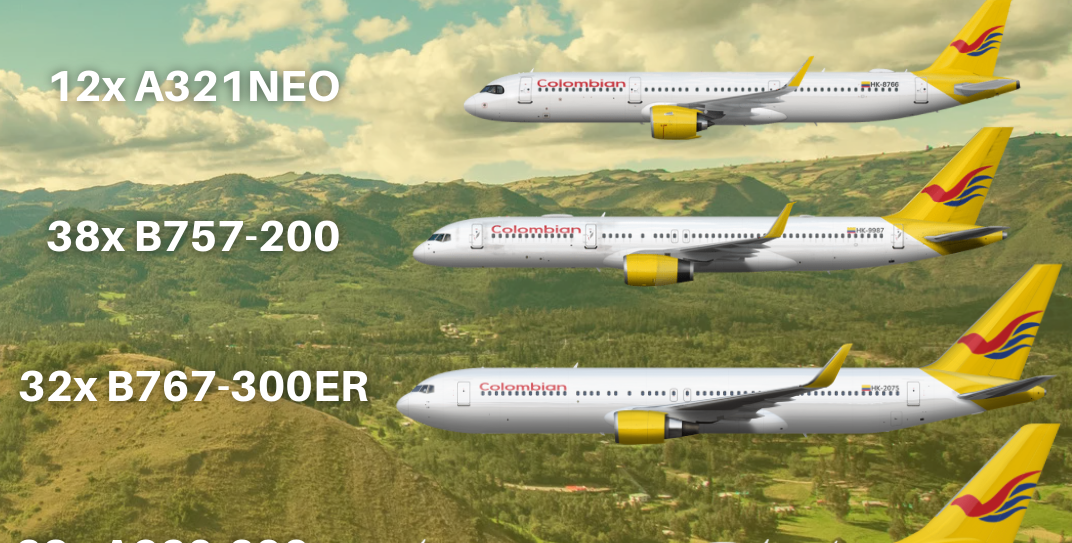 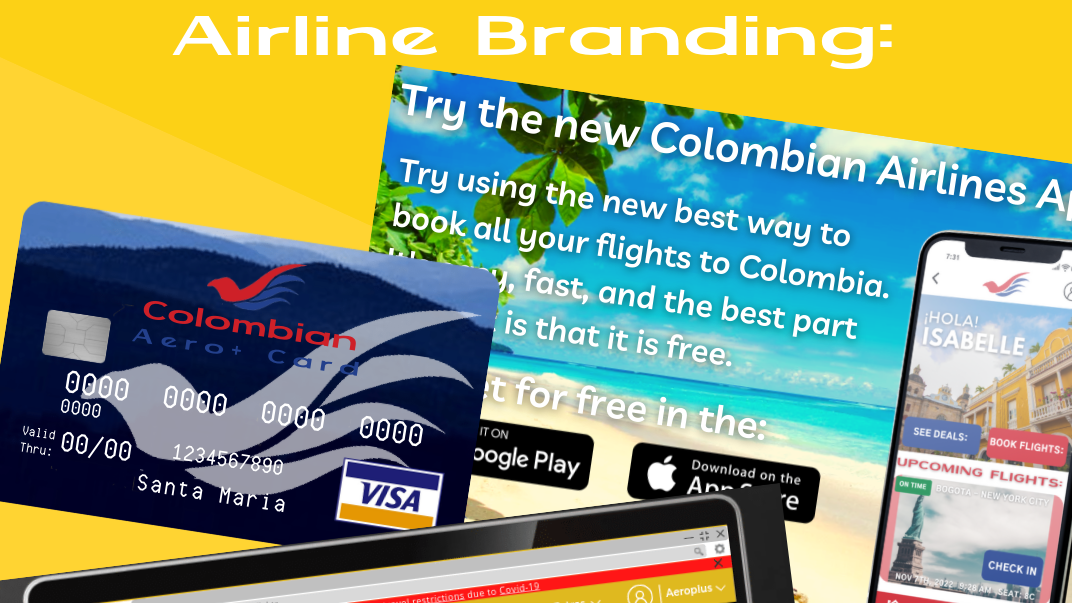 Cóndor is the long-standing flag carrier of Ecuador. Today, it operates a relatively large network of flights across South America, North America, Europe, and even Asia. Founded in 1924 as the Cooperación Colombo-Americana en Transporte Aéreo (CCATA), the airlines roots were as a co-operative effort between local Colombian and American businessmen. The airline remained very small until after the war when an influx of used military aircraft allowed for rapid expansion. By the late 40s, the airline the undisputed largest carrier in the nation. However, in the late 50s, competition on the airlines' American routes ate seriously into profits and began a prolonged slide as the airline's financial state became more unstable. American carriers introducing early jets to routes to Ecuador only worsened this competition crisis. The airline's precarious financial status led to irregular service and delayed maintenance that contributed to a rash of small accidents. Infact, by 1966, most Ecuadorians referred to the airline as "Choca A veces, Tardanza A menudo" (Crash sometimes, late often) or just as CACA (feces) both of which were plays on the airline's name. The company's finances spiraled as it fell from being the premier carrier of the region to nation's carrier of last resort. However, in 1970, the Ecuadorian government stepped up to resurrect the struggling national airline by buying it outright from its private owners. Unsure that the CATA name was salvageable, the government went abroad to search for a design agency that could give the airline a new brand identity. The answer came from a California design firm who took the brand's existing logo, a Condor and proposed naming the whole airline after the bird. Thus, CCATA's brand died and Cóndor was born. A massive injection of capital from the government allowed for a rapid and total rebrand combined with the acquisition of a number of new and gently used modern aircraft. By 1972, the airline had acquired a modest fleet of 707s to eradicate its rickety long haul prop fleet and had begun the process of replacing its Lockheed Electras with Boeing 737s. In 1975, the airline introduced its first widebody, the Lockheed L1011-100 for routes to Madrid and other European capitals. During this period, the airline experienced a rapid turnaround in both profits and prestige. By the early 80s, it was rapidly establishing itself as one of if not the premier carrier of South America. In the early 80s, the airline was re-privatised and opened a subsidiary in Peru. The 80s saw the introduction of 757s to the fleet mostly to serve American destinations and far flung South American routes like Buenos Aires. As the decade wore on, the airline considered expansion into super-long haul routes and explored aircraft that could replace the Tristars and serve farther flung destinations. This exploration became a firm order for 10 A340-500s which was pruned back to 6 of the type after 9/11. The first entered service in 2003. The new aircraft allowed for a direct nonstop service from Quito to Tokyo, further establishing Cóndor as the premier carrier of Ecuador and Peru. The airline's network also allowed it to attract many Colombian, Bolivian, Venezuelan, and even some Brazilian travelers. Despite their high profile, the A345s were never paragons of profitability, leading the carrier to consider replacing them not long after they debuted. The 787 would make this possible and the airline would eventually acquire a substantial fleet of both the smaller -8 and -9 leaving the carrier with only one type of widebody in the fleet for the first time since it had introduced the Tristars. Similar to the rationalisation of the widebody fleet, the shorter haul segment of Cóndor's fleet also saw significant streamlining after the turn of the millennium. Remaining geriatric 737 Jurassic series were finally replaced with A320s and A319s that had made a good name for themselves as new additions to the fleet in the 90s. Today, despite some instability caused by the 2020 Pandemic, the airline seems to be back on its feet and remains a popular and common sight around South America and a favourite catch of plane spotters the world over. The airline's modern livery, which was introduced a decade ago in 2012, features a stylized streamlined version of the carrier's classic condor logo with a largest twist being that the bird has finally escaped its circular cage. The tail features a subtle gradient which evokes the Andes mountains looming out of the fog. The fuselage design is organic; according to the company it mimics the movement of the Esmeraldas River. Cóndor Peru uses a very similar livery to its parent company but replaces the yellow accent with white and removes the small crest of Ecuador placed next to the boarding doors of mainline aircraft. Below is a magazine advertisement Cóndor created to promote its new 787s back in 2012. 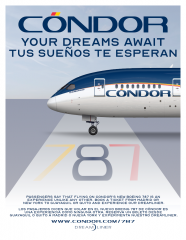 Aerolíneas Españolas (abbreviated to AeroSpaño) is the flag carrier of Spain. It is headquartered in Josep Tarradelas Barcelona-El Prat Airport (or Barcelona Airport). The airline mainly provides international routes and is known as the best recommended airline for tourists to Spain itself. The fleet consists of 12 A350-900s, 10 737-800s, 35 A330-900neos, and 9 787-9s. The airline quickly expanded in the 1980s while urbanisation grew and so did for tourism. Today it is one of the most succsessful flag carriers in Spain.


1 user(s) are reading this topic