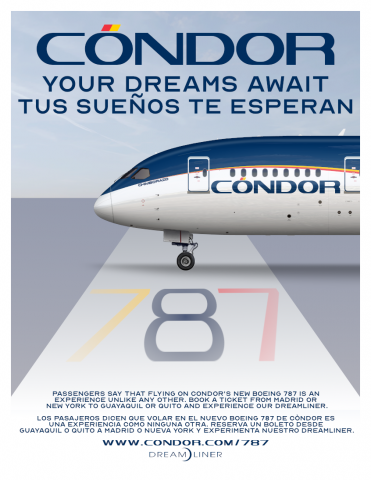 Cóndor was an early customer of Boeing's new 787. Their interest had been expressed way back in the time of the 7E7 nomenclature but had become a real order for 5 of the 787-8 by 2005. Cóndor's board emphasized the flexibility of the 787 and cast it as a possible replacement for both the carrier's shorter range 757s and long haul A340s, which whilst quite young were already proving to be unreasonably fuel hungry. The airline embarked on a massive marketing push from 2009 to 2012 publicizing the various technological efficiencies and passenger comforts unique to the type. The advertisement above was one of the last the airline ran and actually debuted after the type began service for the airline. Like most ads from the promotion, it was bilingual such that it could be used in both of the airline's major market languages without modification.
[Edit: I was linguistically challenged and am now less so]
[Editer: No more Spain vibes on the 787 text]
[Editist: I was still linguistically challenged and it is now less the case that I am so]

Amazing work on this!