23 replies to this topic

Japan National Cargo Dba. JNC is a Japanese cargo airline based out of Nagoya airport. JNC was started in the early 1990's with their first contract being the Toyota Motor Corporation transporting high value Toyota and Lexus components around the world with their two DC-8 converted freighters. Today they do everything from freight forwarding, airmail, contracted shipments and cargo shipment services.

The depicted liveries below were inspired by other traditional Japanese liveries such as ANA or Japan Airways which both have simple yet timeless liveries that can be slightly tweaked to keep them in the modern era. Another part of that was my desire to keep the design in line with traditional cargo carrier liveries from around the world. Though due to the simplicity of the original livery and the recent Tokyo Olympic Games I thought having a simple special livery for the games would be a interesting option to add some more flair to the basic submission. For that livery I used some of the symbols of the 2020 olympic games and adding a simple ribbon style design to the rear fuselage of the Boeing 767-300BCF.

I feel as though the logo properly depicts a global freight carrier with a simple logo that would work on everything from Semi Trucks, Buildings and planes alike which in my opinion for a cargo airline is more important than having a flashy logo as in the nature of their business needs to be more utilitarian than decadent

China Guangdong Airlines is one of the "Major Three" airlines of China. Like the other two, the airline holding company partially state owned. The airline holding company is notable for owning many other airlines in addition to China Guangdong Airlines. The most notable is Macau Airlines, but they also own many regional carriers and China Guangdong Cargo. Headquartered in Guangzhou, the airline has their main hub there. Other notable hubs include Beijing Daxing, Shanghai Pudong, and Chongqing. Founded in 1988 after the decentralization of the CAAC with a small fleet of Boeing aircraft, China Guangdong would grow extremely rapidly in the following years to become the largest airline in Asia and one of the largest airlines in the world.

China Guangdong Airlines was founded in 1988 after the decentralization of the CAAC in order to allow for more efficient operations. As a state-owned airline, the airline started operations with a small fleet of 737 classic and 757 aircraft flying domestic flights within China. As the 1990s rolled around, CGA started expanding quickly, introducing A320s, A300s, and 767s while adding more 737s and 757s to their fleet. In addition, the airline started operating routes to East and Southeast Asia, with the first international route being Ho Chi Minh City. By the late 1990s, the airline placed a major order for A330s and 777s. European, Oceanian, and North American services started soon after the arrival of the airline's first 777-200ER with nonstop services from Guangzhou to Amsterdam, Los Angeles, and Brisbane. The late 1990s was also a period of major consolidation, with CGA merging with many smaller regional carriers.

The period leading up to the 2008 Summer Olympics was a time of rapid change for China Guangdong Airlines. The airline placed aircraft orders for just about every modern plane that Boeing and Airbus produced (Some of them were by the CAAC on behalf of China Guangdong), including the A380. Also notable during that time was the inaugural A330 flight from Guangzhou to Taipei in hopes of normalizing relations between the two regions. China Guangdong got delivery of it's first A380 right before the Beijing Olympics, which it used on Beijing-London flights. The 2010s were an era marked by rapid expansion and record profits. The airline was hit hard by the lockdowns of 2020, but managed to survive by converting most of their fleet to temporary freighters. As of August 2022, most of their fleet remains grounded but people have noticed increased aircraft activity around Guangzhou Baiyun International Airport, almost as though the airline was preparing for a return to normal operations.

As of August 2022, China Guangdong's fleet is comprised of the following aircraft. 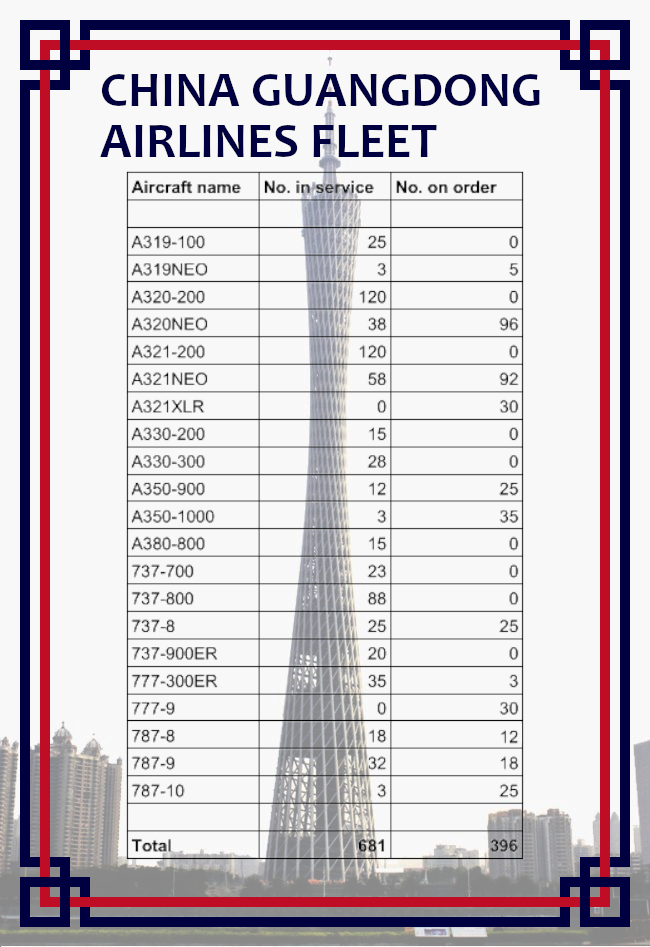 The airline logo is a kapok flower on a pearl background. The kapok is the flower of Guangzhou, which is where the airline is headquartered. The pearl represents the color of the Zhujiang River, a major river in Guangdong. It is also meant to represent good luck and wealth, which is reflected in China Guangdongs' meteoric rise. Pictured below is China Guangdong Airlines' most recent livery features a large red stripe meant to resemble a silk ribbon. This was added in 2013 as a part of the airline's areal silk road project to connect Guangzhou to the world as a part of China's BRI.

Macau Airlines is a regional subsidiary of China Guangdong Airlines. 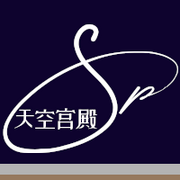 The Cosmopolitan Grand Casino in Macau is one of the oldest and most prestigious gambling establishments located in the tiny nation/region. Due to its status as the only area in China in which casinos are legal, Macau is a preeminent gambling location and the higher echelons of its casino scene are in constant competition. The Skypalace is an attempt by the Cosmopolitan Grand Corporation (CGC) to one up every other casino in Macau and the world. Using similar legal doctrine to offshore casinos based in boats, the Skypalace operates in the skies above international waters as a casino without regulation. CGC acquired an ex-Himmelbahn MD-11 in 2012 shortly after its retirement from commercial service. Refurbishment of the aircraft took nearly two years because the entire interior was gutted and rebuilt to feature a gaming hall, bar, and a series of private suites. The exterior of the aircraft was decorated in a unique purple scheme. Due to the exclusivity and cost of a ticket for a night aboard the Skypalace, who boards and what they do aboard remains largely shrouded in mystery. Only high rollers at the Cosmopolitan Grand or partner casinos are even allowed the opportunity to purchase a ticket aboard. Some humanitarian and other watchdog agencies have alleged that more than just gambling regulations are flouted aboard in international airspace, but these allegations have been strongly denied by CGC and lack conclusive evidence. 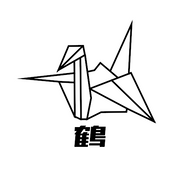 Crane is an LCC based in Japan. Founded in recent history, it was birthed with a large cash base that was used to procure a small fleet of fuel efficient A330 and A320neos. The airline features very limited IFE and other costomer amenities in exchange for lower than market average pricing. The brand identity was developed specifically to cater to younger demographics.

Air Jeju was founded in 2005 as Korea's first low cost carrier. It was created as a joint venture between the government of Jeju and the Sunray Corporation of Seoul. It started operations in 2006 with 5 DHC-8-400s based out of Jeju International Airport.

FAST, officially Formosa Aerial Service for Transport, (福聯航空/FU) is a Taiwanese regional airline with its headquarters located in Songshan International Airport (TSA). The firm was founded in 1972, offering ground and baggage handling services to foreign airlines, as well as charter services using a single Fokker F27. The airline began to sell its first scheduled services in the first quarter of 1980 to Kinmen under government subsidization.

The airline now operates a fleet of 28 Airbus Industrie and ATR aircraft on regional and domestic services throughout Taiwan as well as international flights to Japan, South Korea, the PRC, as well as Hong Kong, Vietnam and Thailand.

TAIPASTAR Airways is a full-service premium airline based in Macau operating flights around Asia, to Europe, Australia and the Americas. Founded initially as a high-end charter airline bringing Chinese tourists from the Mainland to Macau; it steadily grew to an international airline bringing tourists to and from Macau, as well as offering cheap fares from the West to Asia and Australia.

The livery depicted below is the 2014 livery adapted from the initial 1990s livery. The livery was designed to reflect the waves of the ocean and the changing city it calls home, the stars reflect how Taipastar is unique among other airlines providing a high level of service and treating each customer like a star. It's corporate color is the jade green of the Macanese flag, complimented by yellow and black.

The Boeing 787-9 is the pride and joy of Taipastar Airlines. It introduced a new era of travel for the airline with lush cabins tailored for a high-quality flight experience. The eight First Class suites dubbed "Star Suites" are the highest level of service. Laid out in a 1-2-1 configuration in a small intimate cabin at the front of the aircraft. Passengers can enjoy the amenities of the Star Suite Lounge in Macau Airport as well as lounge access at all other airports. Private-chauffeur service to the airport and on arrival is also offered complimentary to all passengers. 42 Business class seats referred to as "Galaxy Pod" are also available onboard across two cabins as well as 243 Economy class seats. 4 rows of economy are "Star Couchette" seats, turning into a couch-style seat after takeoff, these seats are available to reserve for a premium from booking up until 6 hours before flight.

A fleet of narrow body A320 family aircraft, both ceo and neo, compliment the Boeing 787s on short and medium haul flights.

CherryJet is a Japanese LCC formed in 2010. Operations began in July 2011 out of Osaka's Kansai Airport with a pair of Boeing 737-800s. The airline has since grown to have a fleet of over 30 aircraft, and bases in Naha, Osaka, Sendai, and Tokyo.