27 replies to this topic

For the most part, you all know who I am. But for those who do not, my name is Adam, and I am a backer of an up-and-coming airport builder game called Sky Haven.

Sky Haven is an airport builder game unlike any other. Allowing you to not only create your own airport, but be the manager of it as well. And what's more, unlike other games that are similar (like Airport CEO and SimAirport), Sky Haven is 3D, and accurately portrays all real aspects of an airport operation large and small. More so, unlike other airport builder games, Sky Haven features a historical timeline, allowing players to build an airport as far back as 1910, and grow it into a modern national hub, over time. This timeline also means that historical resources, buildings, vehicles and aircraft are featured. Sky Haven, according to developers, is planned to have Steam Workshop support, meaning that custom airport modules may be achievable! 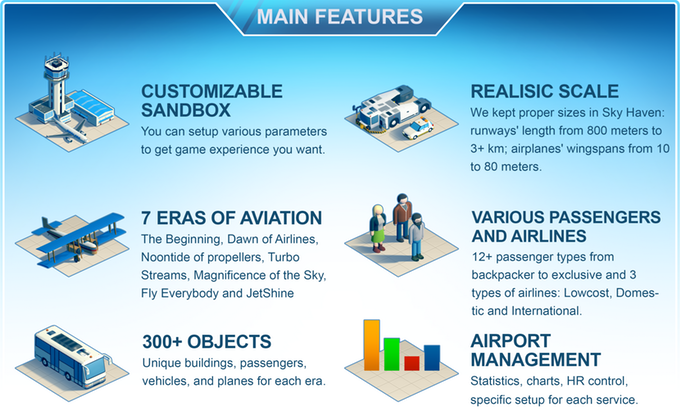 Sky Haven is a widely anticipated game, as it was successfully funded on Kickstarter, reaching $60,000 (with an original goal of just $40,000) from over 1,200 people. Right now the game is very much in an alpha phase and will not be available to the general public until Early Access, in August of this year. The full game will not release until December of this year.

Here is a YouTube video of their kickstarter program (now over, sadly

As a disclaimer, footage seen in this video is not representative of the finished product, there is still a lot more left to do! 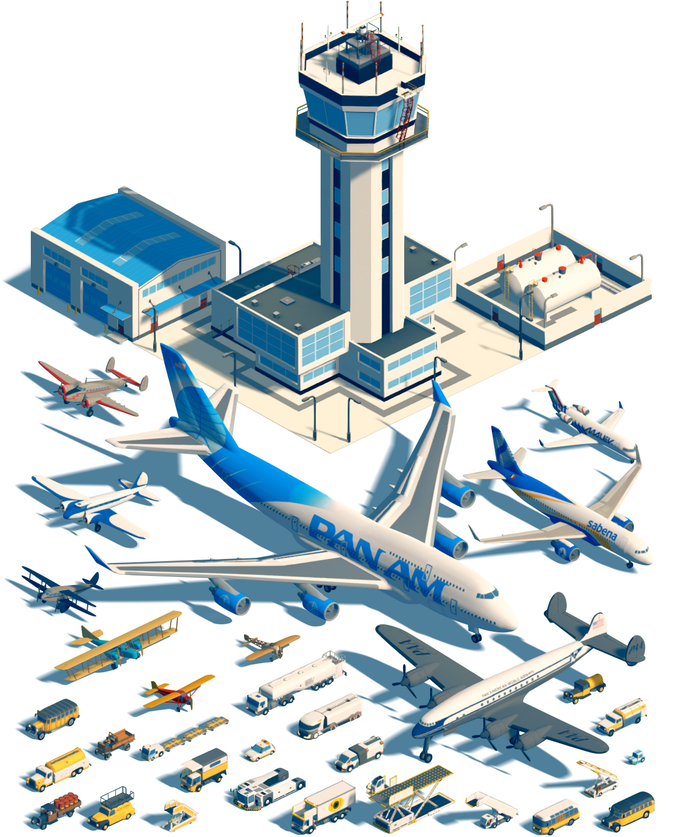 Those aware of my previous work in Project AE: SimAirport will know that I recreated brands from Airline Empires in SimAirport as playable airlines. I plan to do the same thing in Sky Haven, should this feature be possible. From what I've heard from development, it sounds like it most likely will. Once I am able to begin this process for Sky Haven, I will officially launch Project AE: Sky Haven. Until then, I will be updating this post with game updates as they happen, and will keep you all in the loop about its whereabouts and whats expected to come!

I am already in love with this game, and I hope that many others will be as well!

The Developers have finally released Sky Haven Alpha 0.2.1! This means the introduction of Fuel Management and Flight Scheduling, among various other features. The new update also brought a list of bug fixes and general quality of life improvements to the game. 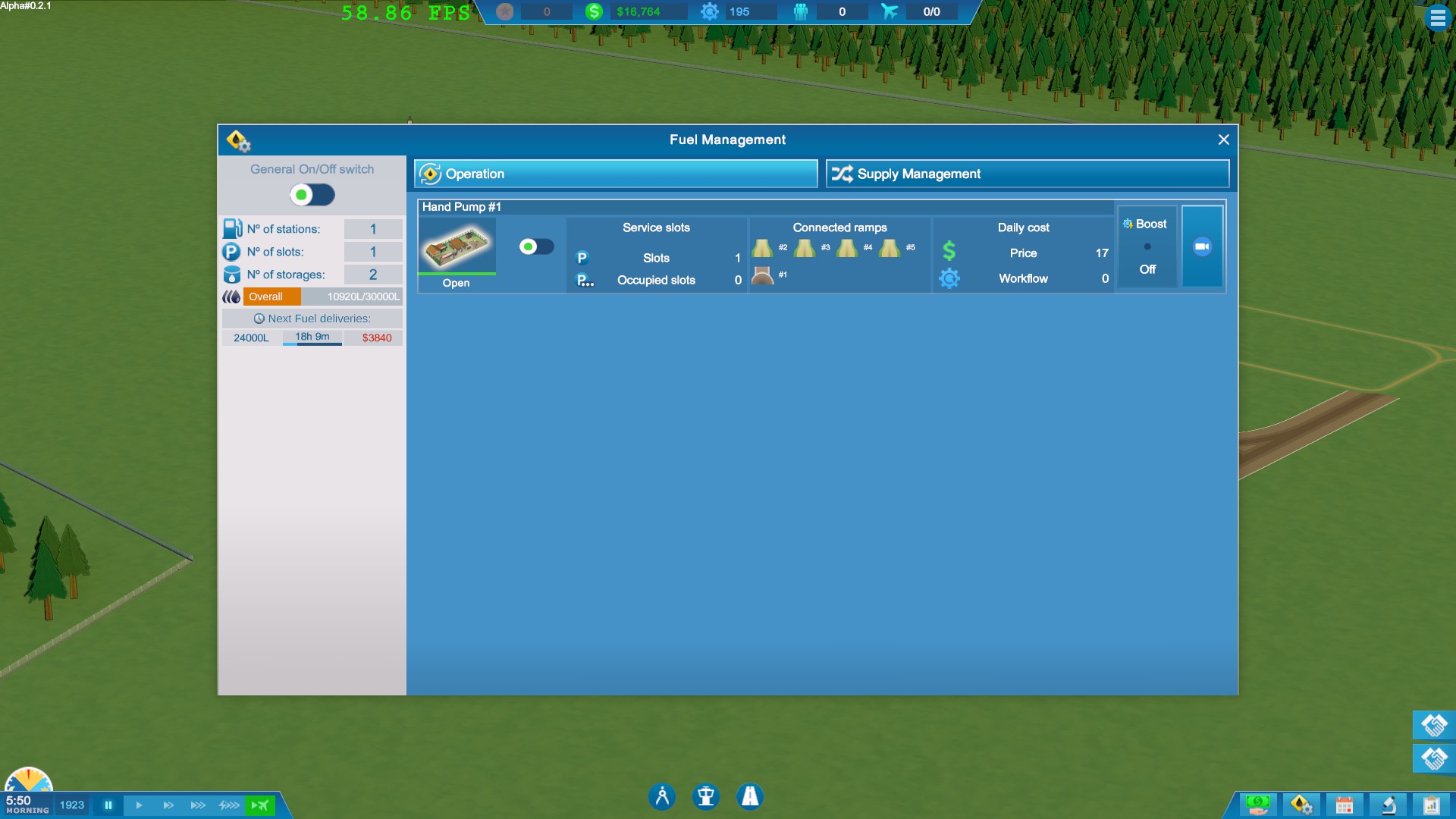 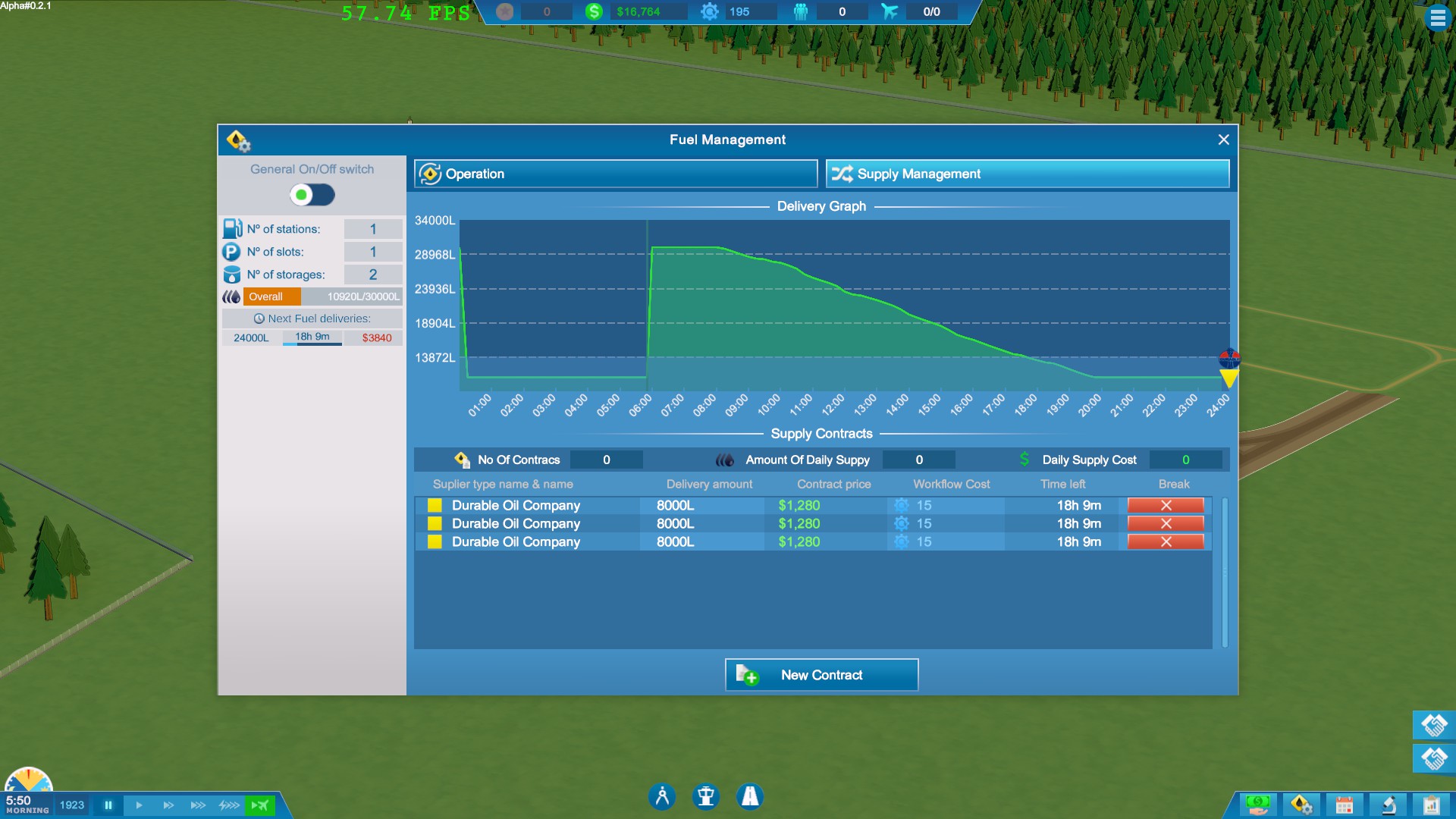 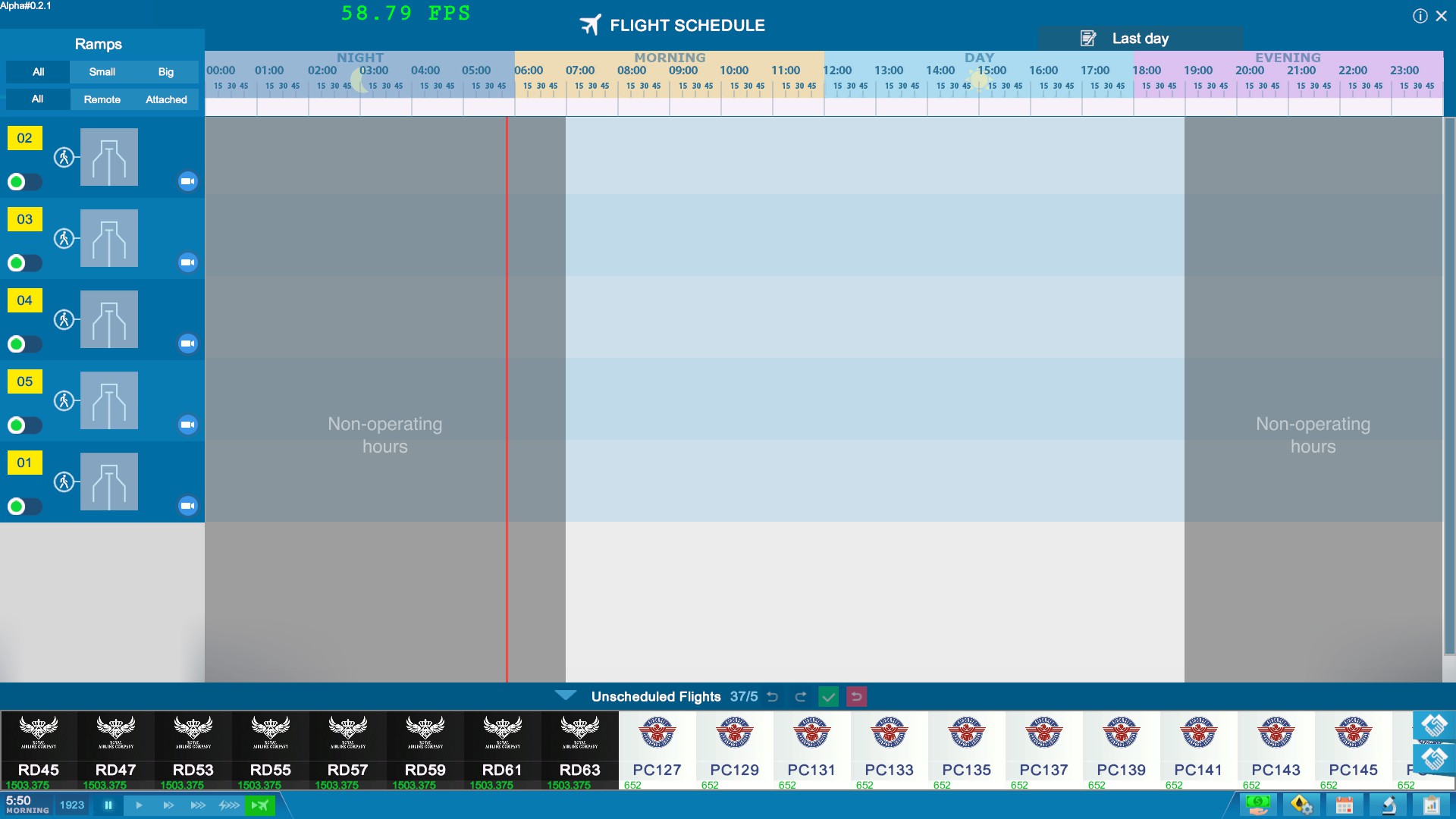 Photos shown are from Sky Haven Alpha gameplay, a work in progress.

Hell to the feck yes!

Looks awesome! Looking forward to it!

I find the historical aspect of this game interesting, defiantly worth a look, also it would be interesting to see if they add zeppelins into the game, because these Trans-Continental or Trans-Atlantic behemoths would carry a lot more higher-paying customers than your small bi-plane passenger's would. And even if they were just doing a mooring and refueling stop to take on cargo or mail, that would still net quite a bit of profit, and would add in some interesting game play later down the line as Zeppelin travel declined and died out, having the player needing to (If they sunk in a bunch of money on infrastructure for this) deal with the repercussions of finding a new money maker and what to do with the abandoned infrastructure.

Is this game ready?

Is this game ready?

Sky Haven will not be ready until (the earliest) August, when Early Access goes live. The full release is expected for December this year.

So far, the game is still on track. I'm expecting some big updates in the next couple weeks.

Good luck! This game looks amazing and would love to try it in August.

While the most recent Sky Haven update was a few weeks ago, I do want to address some of the new things we have in the game (as of now).

A lot has been introduced since my last update. So here's a little sneak peek of the new stuff:

Concrete Runway
With this new update we received the concrete runway and ramp spot, which allow for larger aircraft operation. Airplanes like the Lockheed Constellation, Convair CV440, and so on have been added in this update, and so the need for a larger runway became ideal. 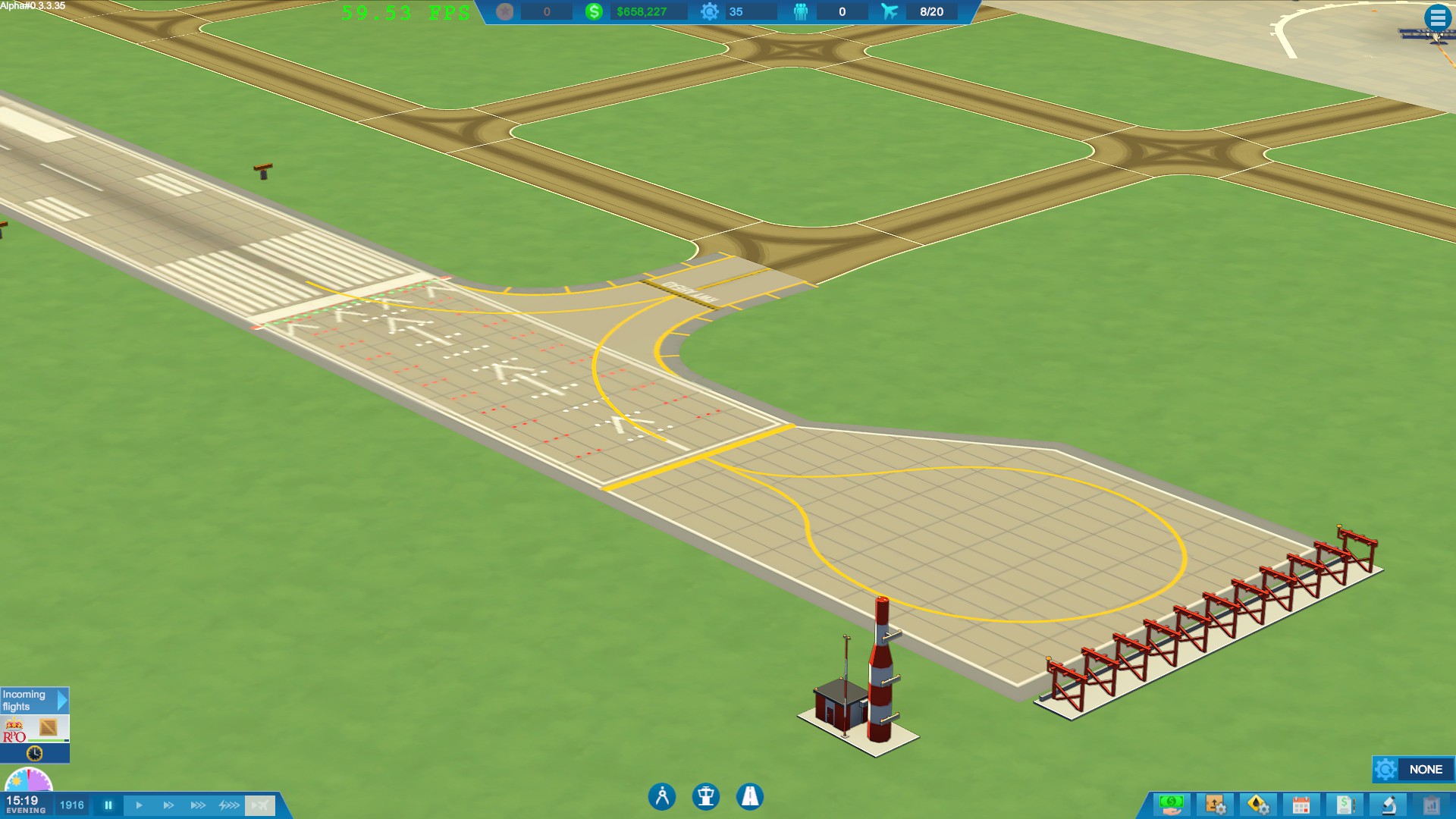 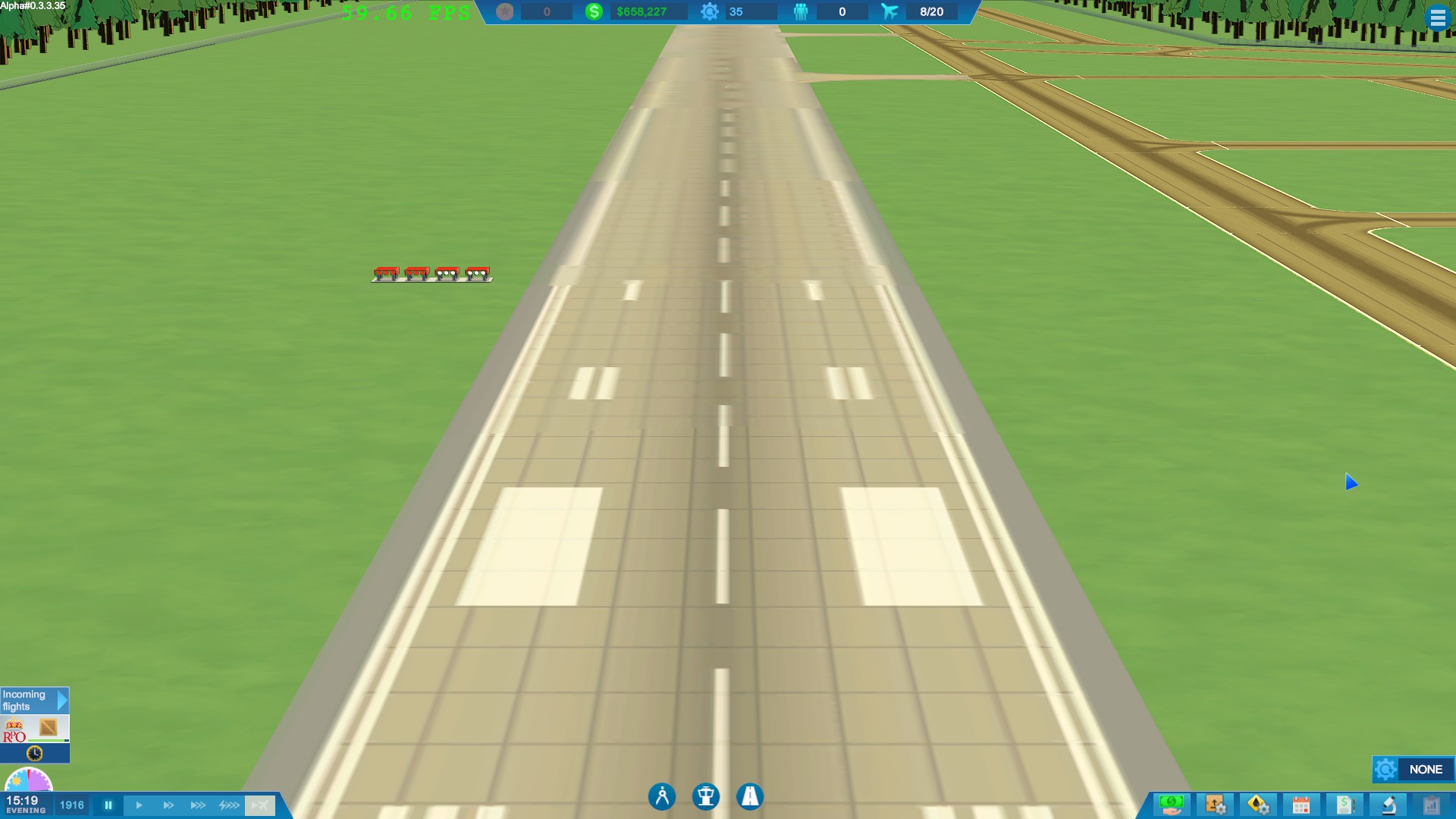 New Ramp Vehicles
Included in this update, for the first time, are baggage belt loaders. Yes, there are also buggies with trailers too (the early version of today's baggage cart). Also included in this new update are larger air-stairs, they have been around in the game already, but needed to be bigger for the new larger aircraft. The vehicle positioning still needs to be tweaked (as you can see below), but after all this game is still in beta. 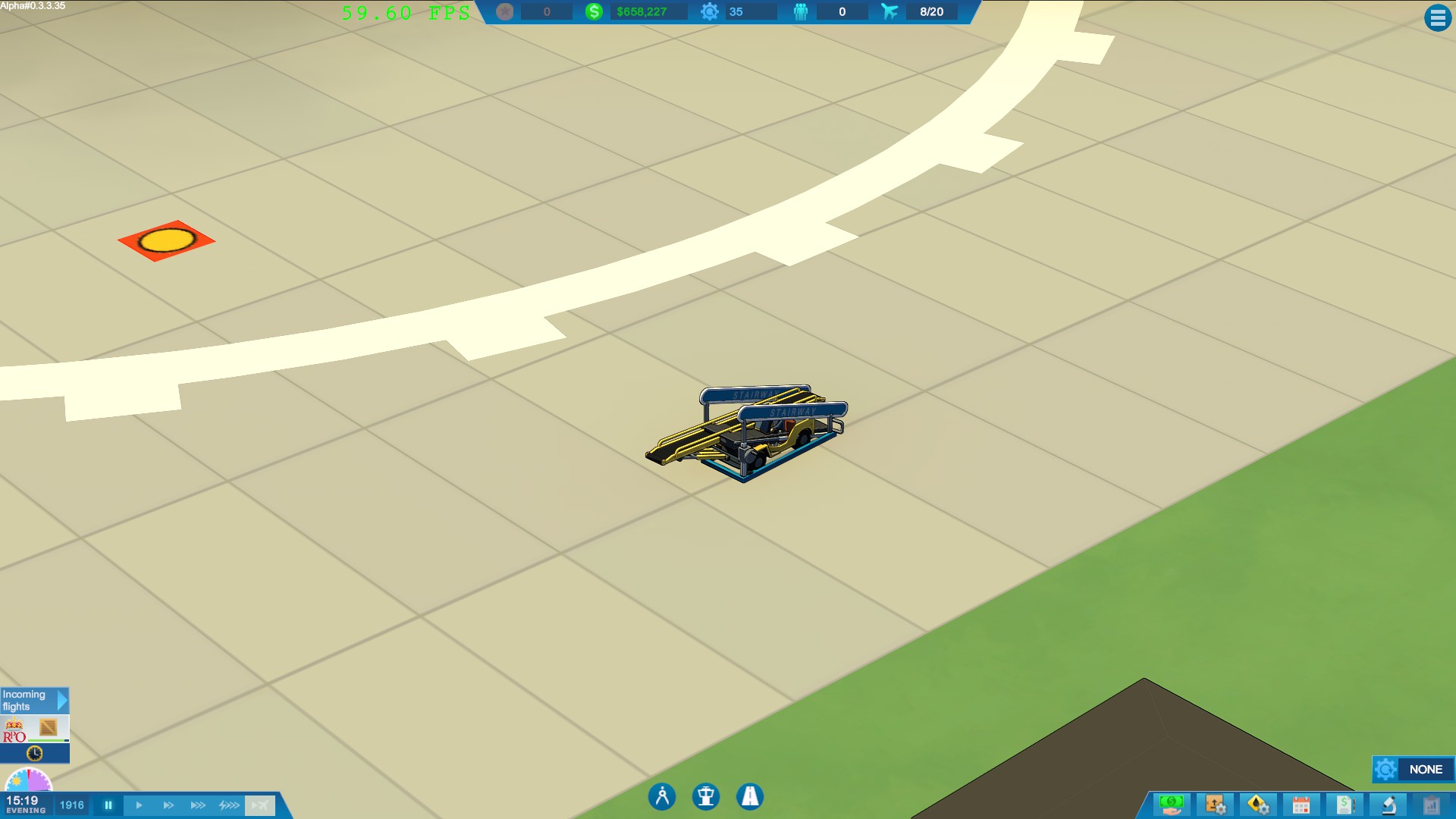 New Air Traffic Control Building
A bunch of new buildings have been added in this update, including a new air traffic control building, which is a big improvement from the previous wooden-only tower we had. 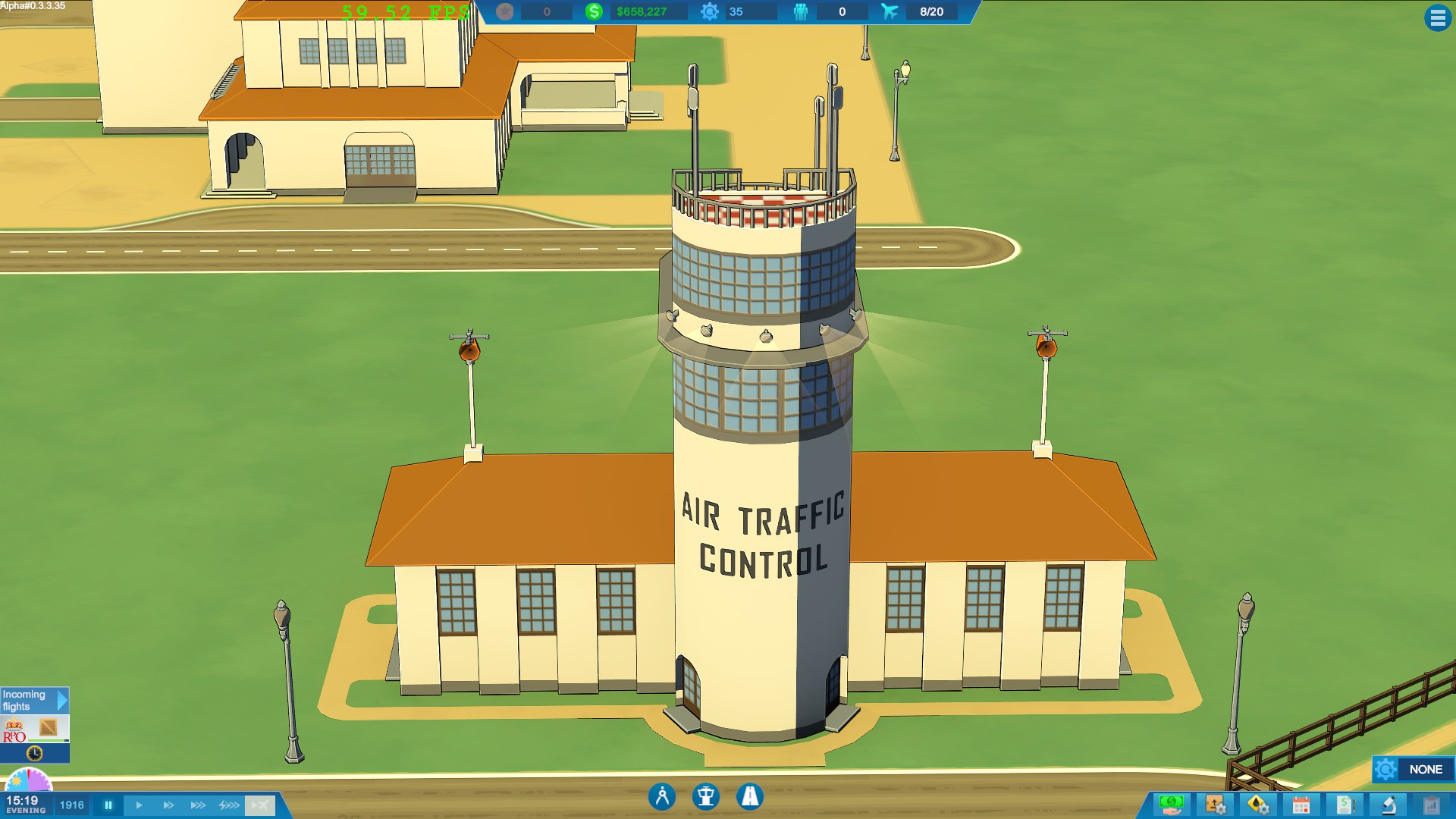 New Fuel Caverns / Cisterns
In this update, two new fuel buildings have been added. A large silo (not pictured), and the small fuel cistern, seen below. This cistern is the precursor to what will eventually become modern day mega fuel farms, which are common at almost every large airport in the world. This is also a super early hint that Sky Haven will feature in-ground fueling, as well as truck fueling.

Here is a sneak peek of the modern fuel truck which has been confirmed in Sky Haven, currently unplayable in this version of the game: 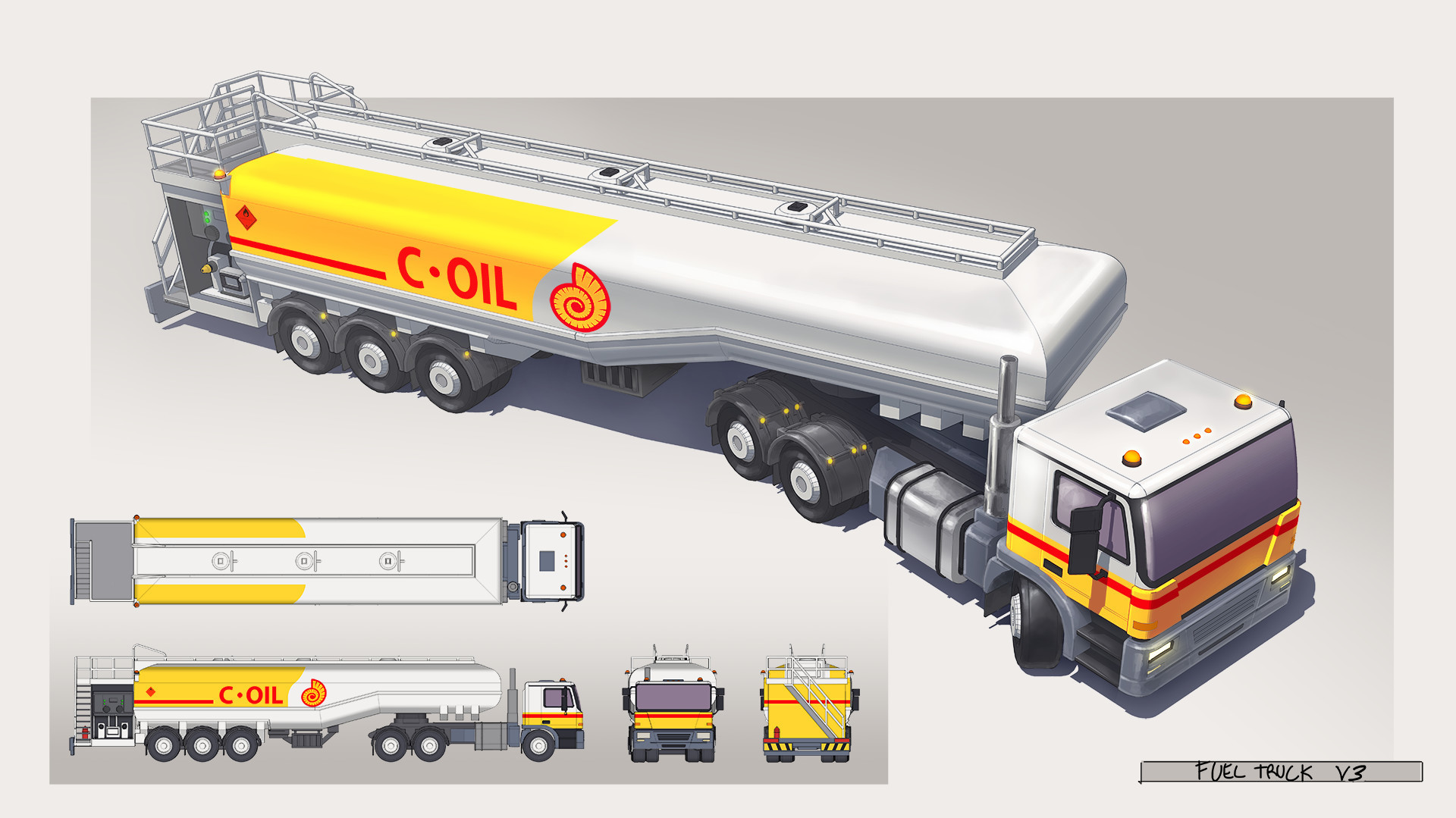 And of course, the Fuel Cisterns: 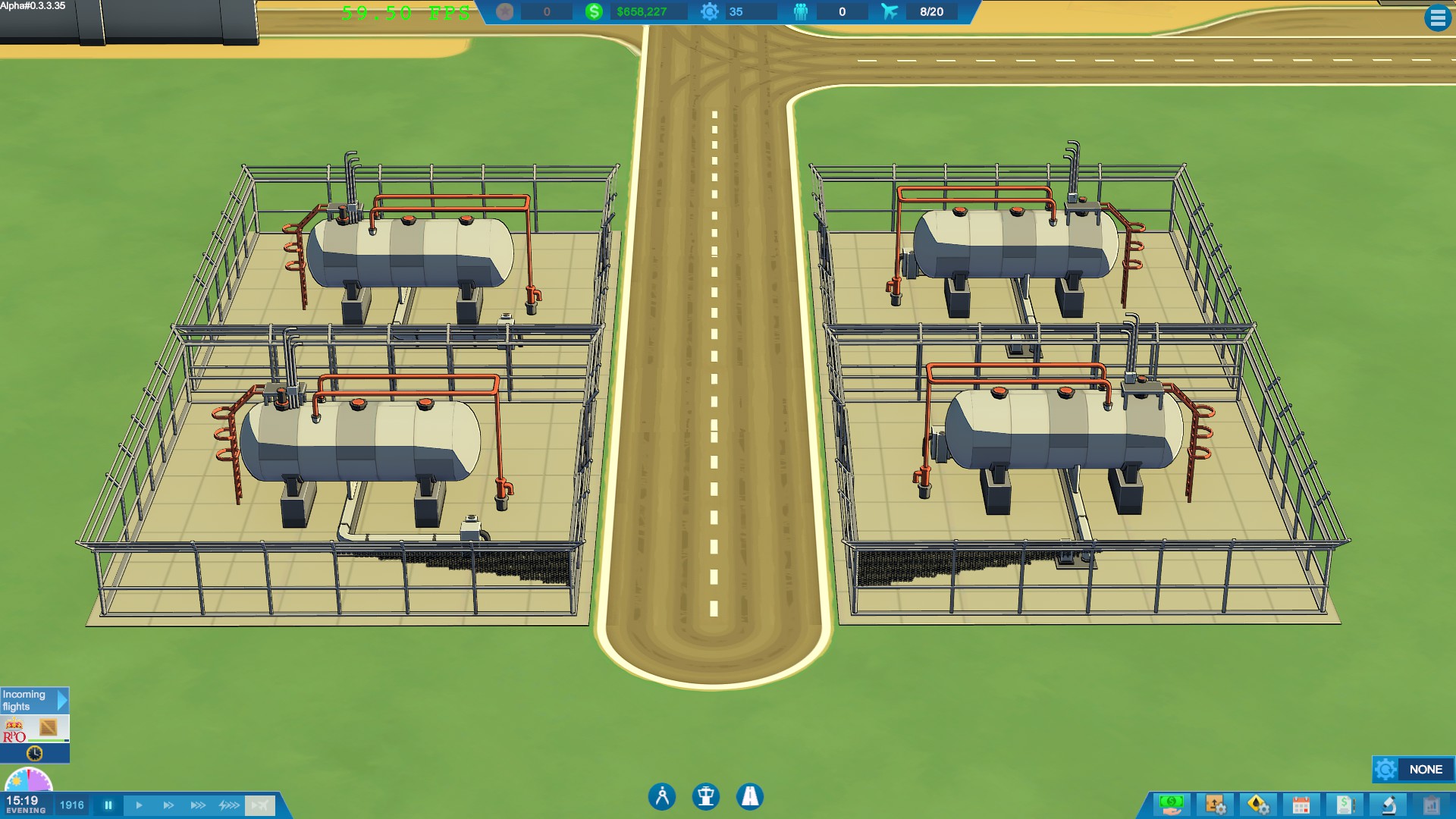 New Ramp Service Building
For those unaware of the full list of features in Sky Haven, the game features ramp services. In the current stage, it is merely a vehicle which approaches the plane and does, well...service-y things. But this is an indicator that down the line, maintenance buildings will be part of your airport landscape. The maintenance building in this build is larger than the previous Ramp Service building, and features both offices and an attached hangar with it. 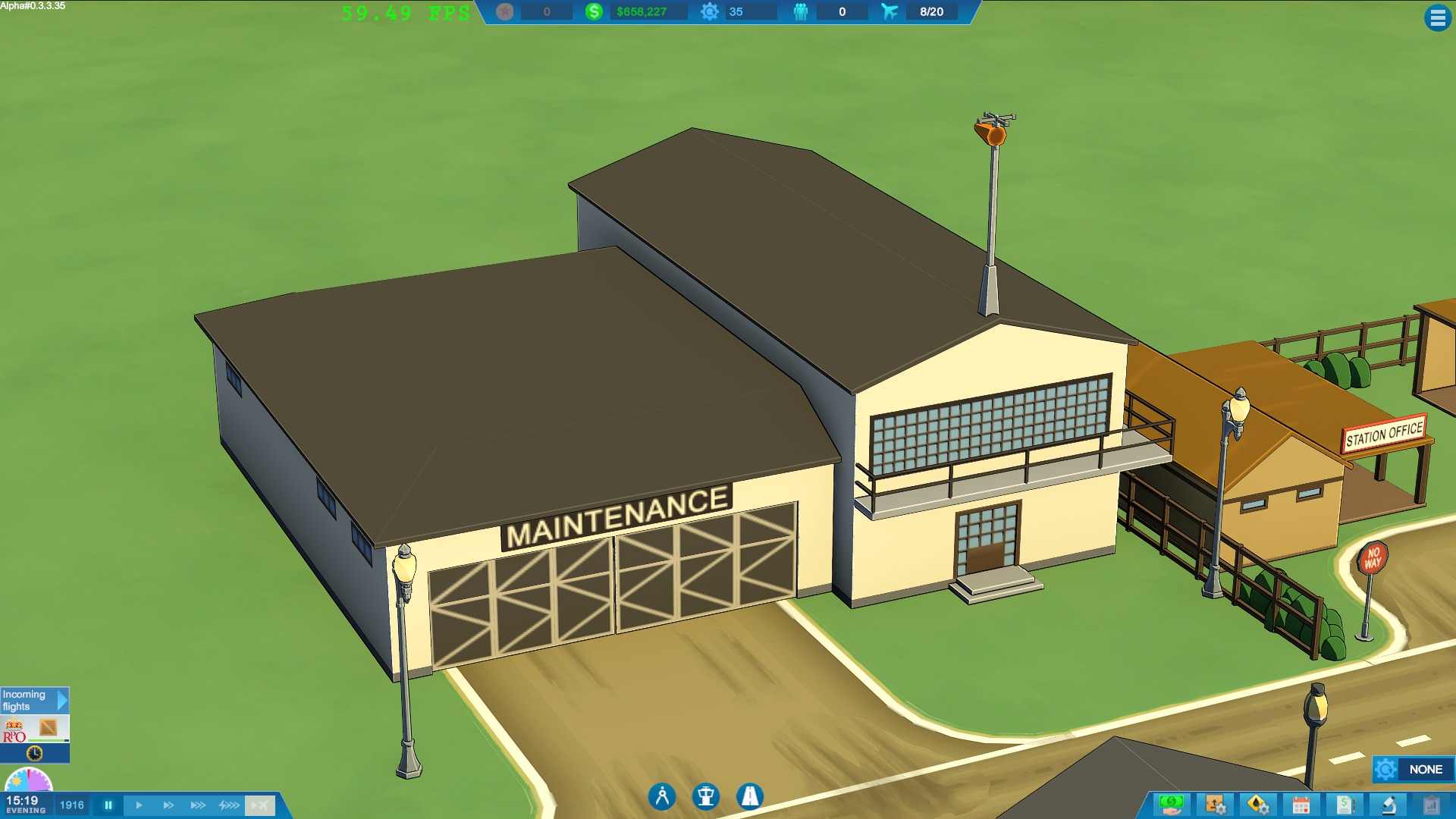 I'll leave you with one more gift for this update, a link to a variety of vehicle and buildings concepts for the full game. Some of these vehicles (I don't know which ones specifically) have already been confirmed in the game!

That's it for now! I will continue to update this post with any new content that comes out of Sky Haven's development.

Please, sir, can we have some more?

Please, sir, can we have some more?

Be patient, good sir. Updates will come, and Adam will hopefully keep us updated as they do.

By the way, have you started considering which airlines you're going to add yet?

Back to Other Games