My first ever Trip Report... sorry I didn't take enough photos; I wasn't going to do this at first.

EDIT: reuploaded the photos via imgur.

Though I had wished it were under better circumstances, a week ago I took my first international flight in over three years: an overnight trip to Sydney with my parents and two of my uncles. The outbound journey was not much to write about; as this was an overnight trip we booked economy (seat only) fares for both flights and took carry-on luggage only. All I could say was that the chicken, brie and cranberry sauce sandwich I bought onboard was all right despite the price (NZD 9.00/USD 6.10) and that the couple seated in the row ahead of me had their seats reclined for most of the flight, so not much personal space. We arrived in a hot and humid Sydney about a half hour late, though clearing customs and biosecurity was fast thanks to e-gate access and express passes.

We arrived at Sydney Airport a little after 3pm, in order to spend as much time as possible at the Air New Zealand lounge (we all got in thanks to my mother's Gold Elite status, which could bring 4 guests in). Upon arrival, I went to NZ's check-in kiosks to see whether the regognition upgrade my mother applied for me went through, which it did. Clearing customs was fast since the elimination of the departure cards, and within 15-20 minutes we made it airside. After spending around 20mins looking around the main shopping area (mainly the massive duty free store and several high-end boutiques, plus the odd souvenir shop and WH Smith), it was a long walk to the lounge, which was above gates 57-61. 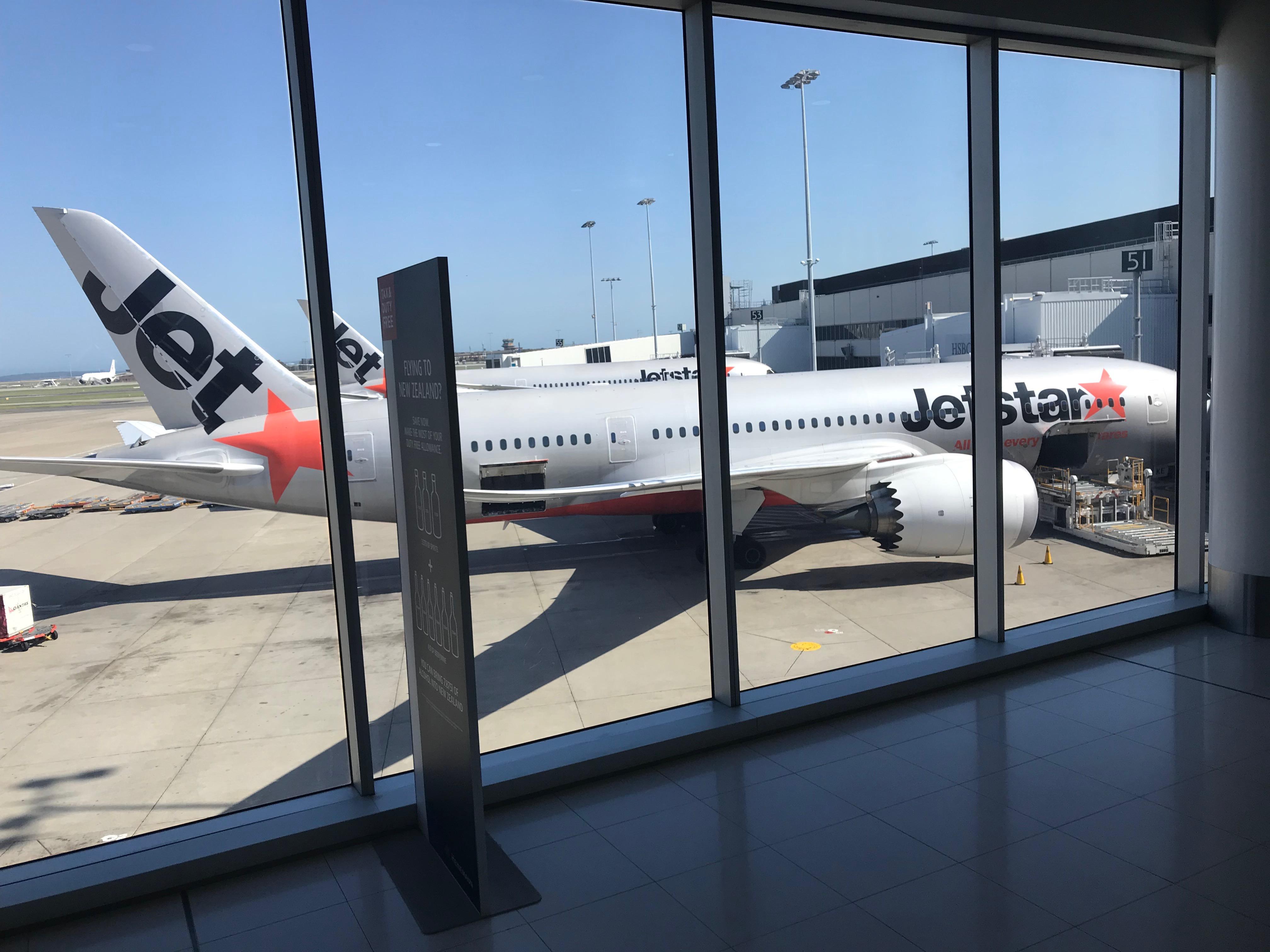 The lounge was a little smaller than the Auckland lounge, though it was less crowded, and both the Barista and the Chef were on station when we arrived; the latter serving up Nachos to order. Spent my time tending to Caulson Air in between refills of Coke Zero at the nearby bar, as well as the usual planespotting. 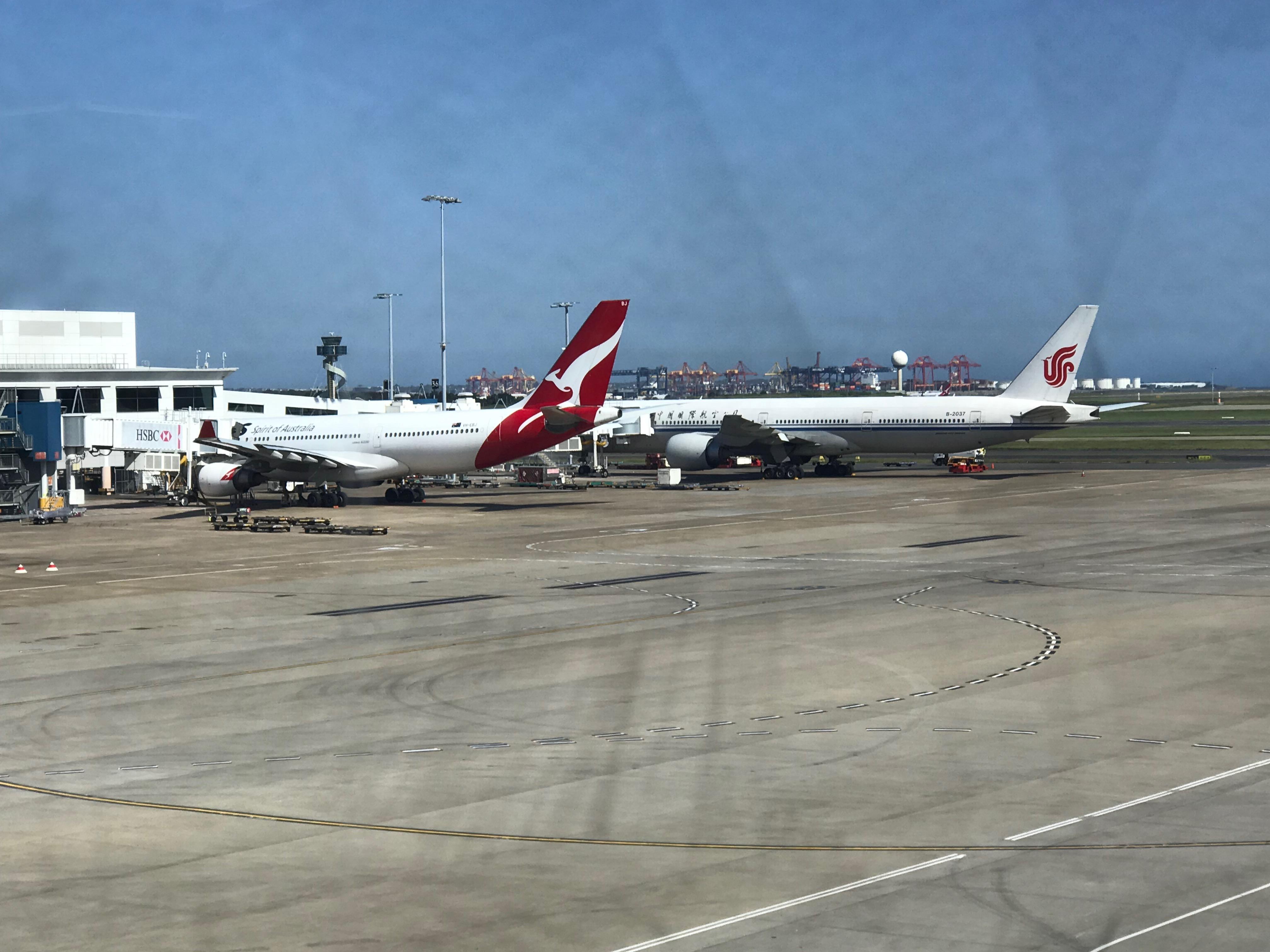 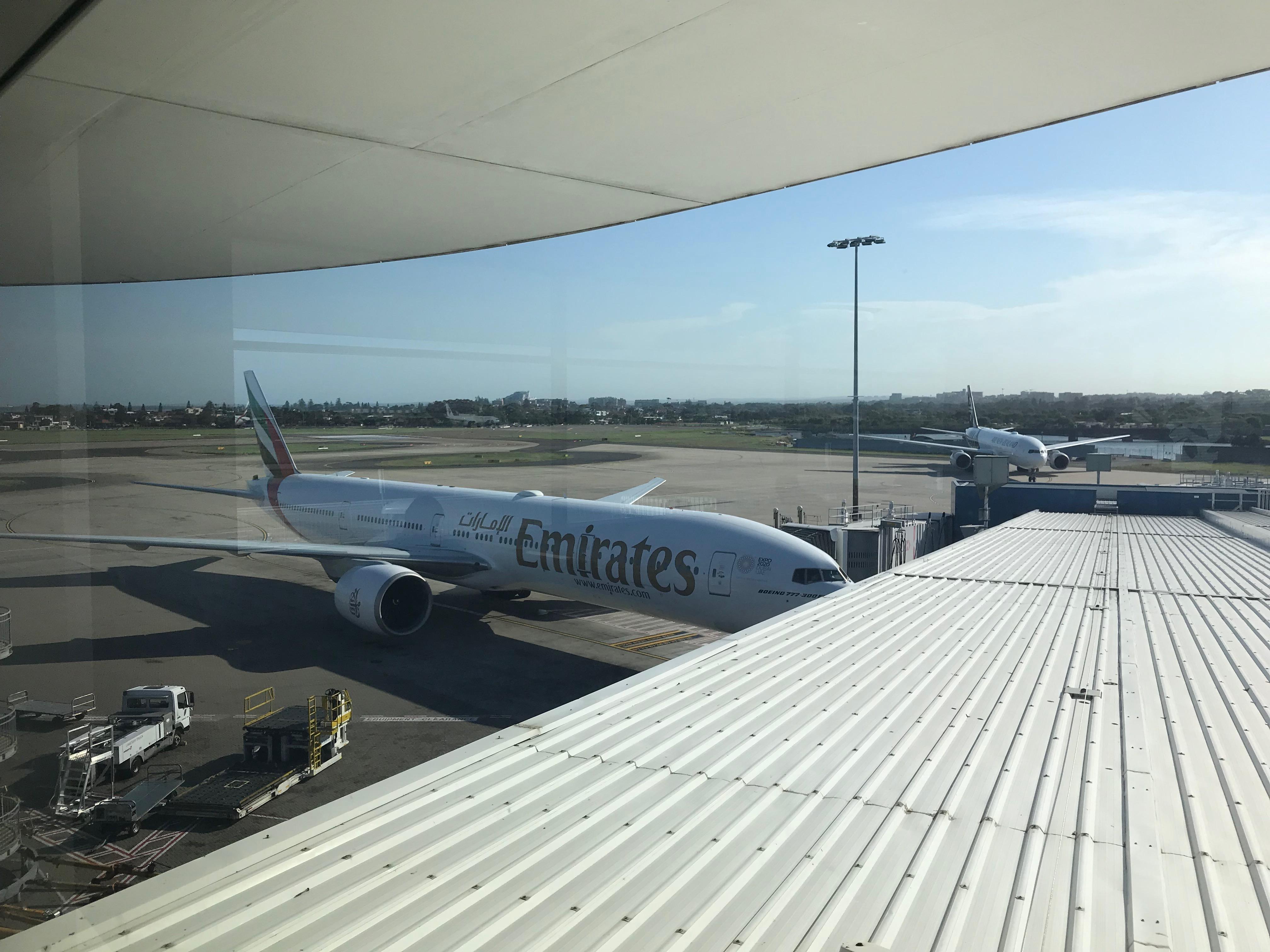 Emirates 777-300ER, flying EK419 to Bangkok and Dubai. In the background is my ride, ZK-OKE, inbound from Auckland as NZ105 (what we flew the previous day).

With about a half hour before boarding started, I went back downstairs to pick up some food for my parents (they stayed in economy, but they got a row to themselves), and to look around some more. One of the best things about SYD was the kids shop that had Diecast models on display and for sale; however it seems to have gone sometime in the intervening years. Eventually Boarding commenced around 1830-ish (AEDT). 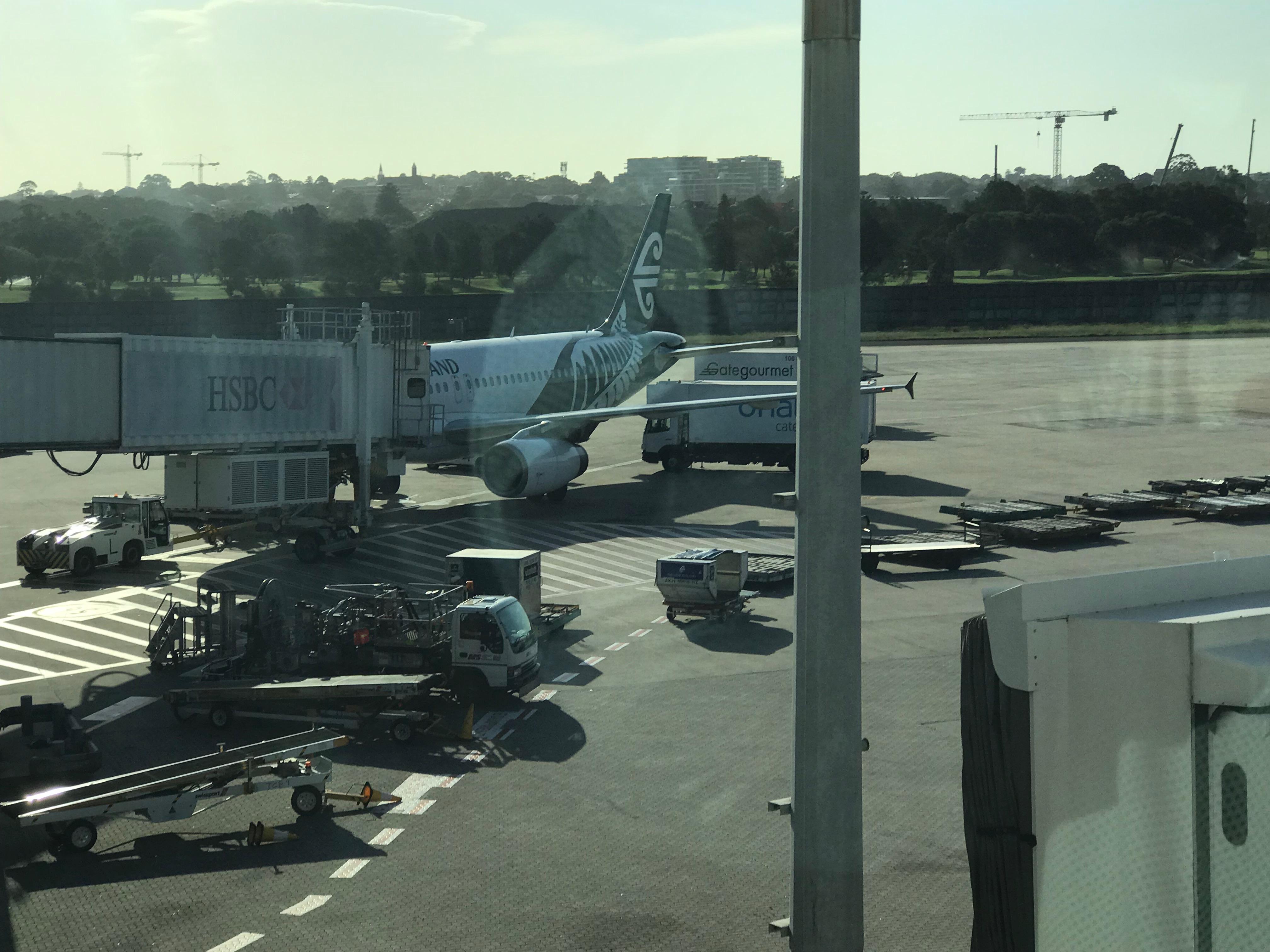 After dropping off the food with my parents, it was time to board. The business cabin was in a 1-2-1 configuration . I didn't mind the herringbone seat that much, though the obvious issue of not facing the window did lead to a bit of twisting and turning (for photos) when we eventually pushed back. Hopefully the new seat currently in development would remedy this (or at least, switch to reverse herringbone). Fairly empty cabin for this flight; apart from one of my uncles and myself, there were about 5-6 others in the cabin. Pre-flight drinks were served, in the form of Laurent-Perrier Brut NV champagne. Water bottles were already provided on the seat, along with headphones, the menu and a pillow. After a quick top-up of champagne, pushback began a few minutes after STD, taxiing out to Runway 34L. 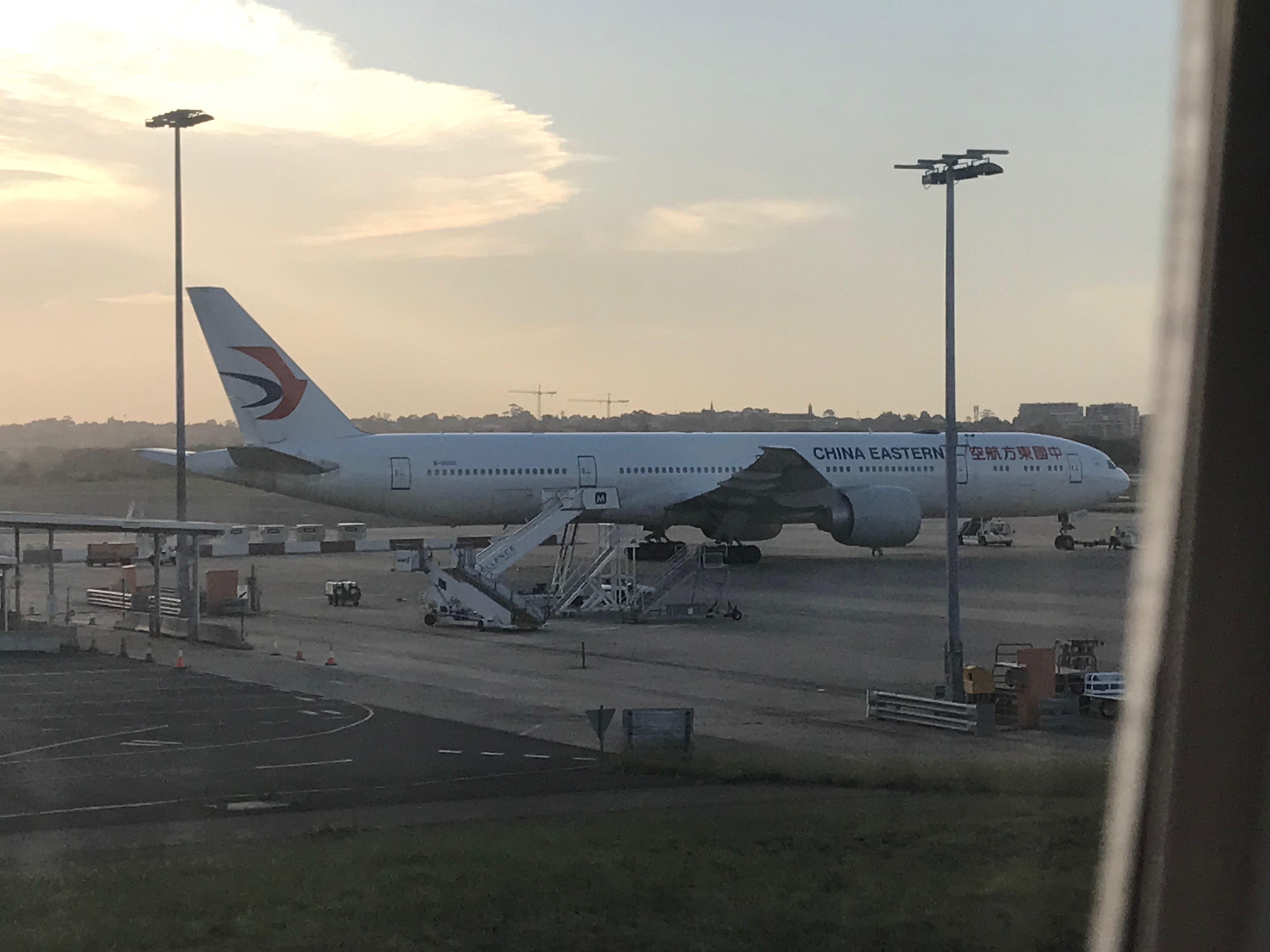 China Eastern 777-300ER parked on the remote stand. The previous day, an ANA 787 joined her as well. 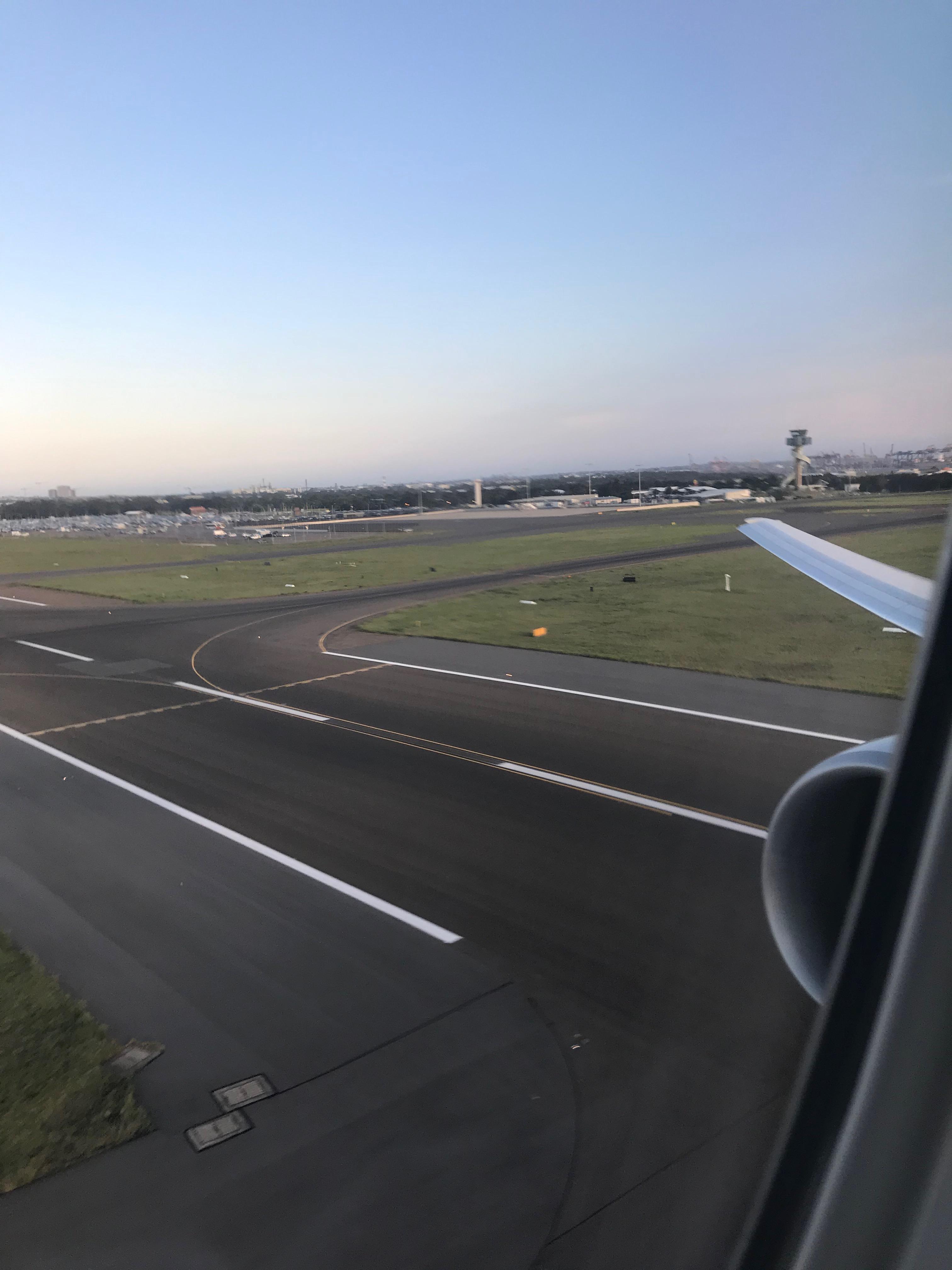 The best feeling in the world: the moment we rotate. 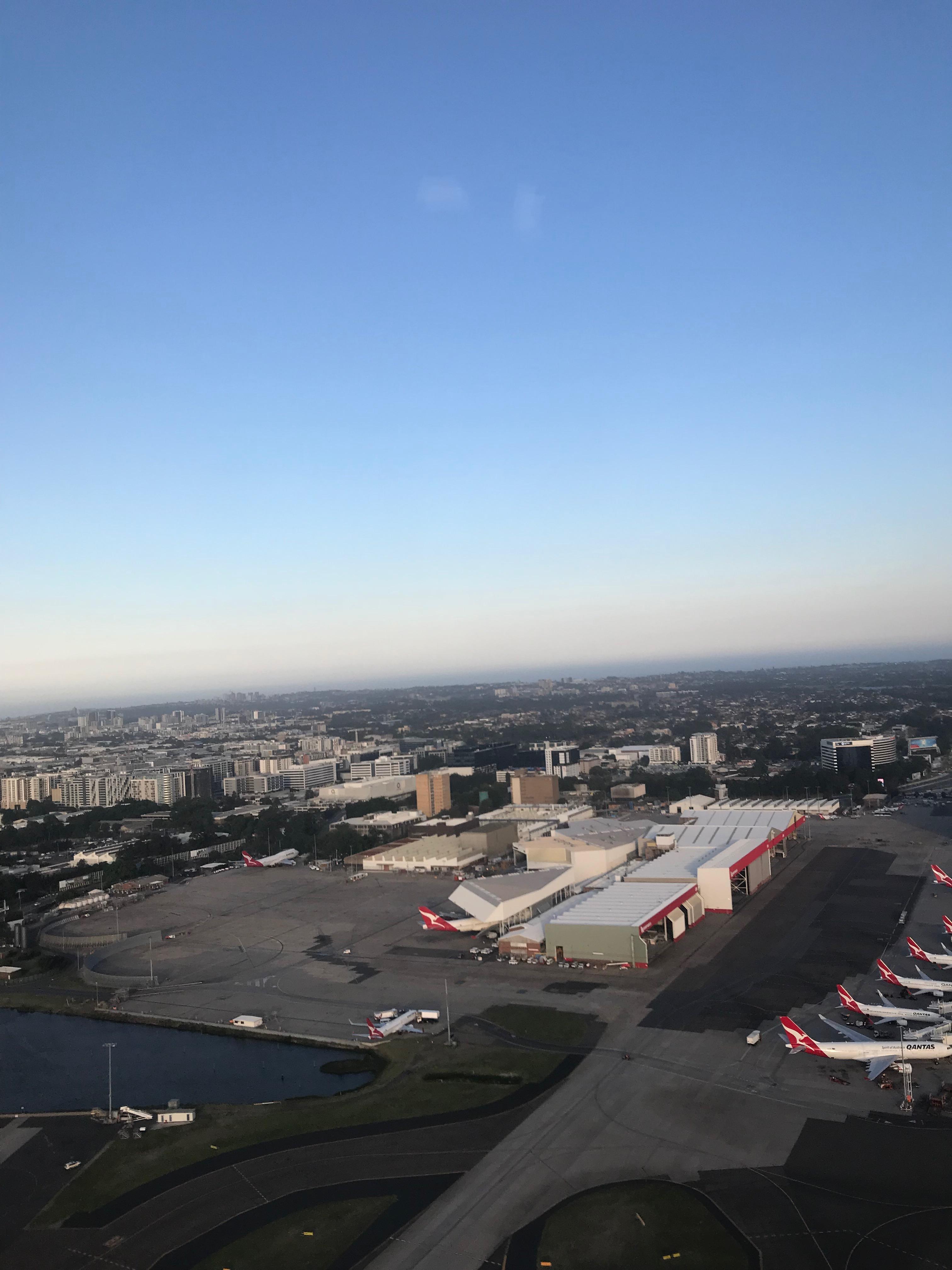 Qantas' maintenance centre and a bit of the domestic terminal as we have positive rate and gear up. 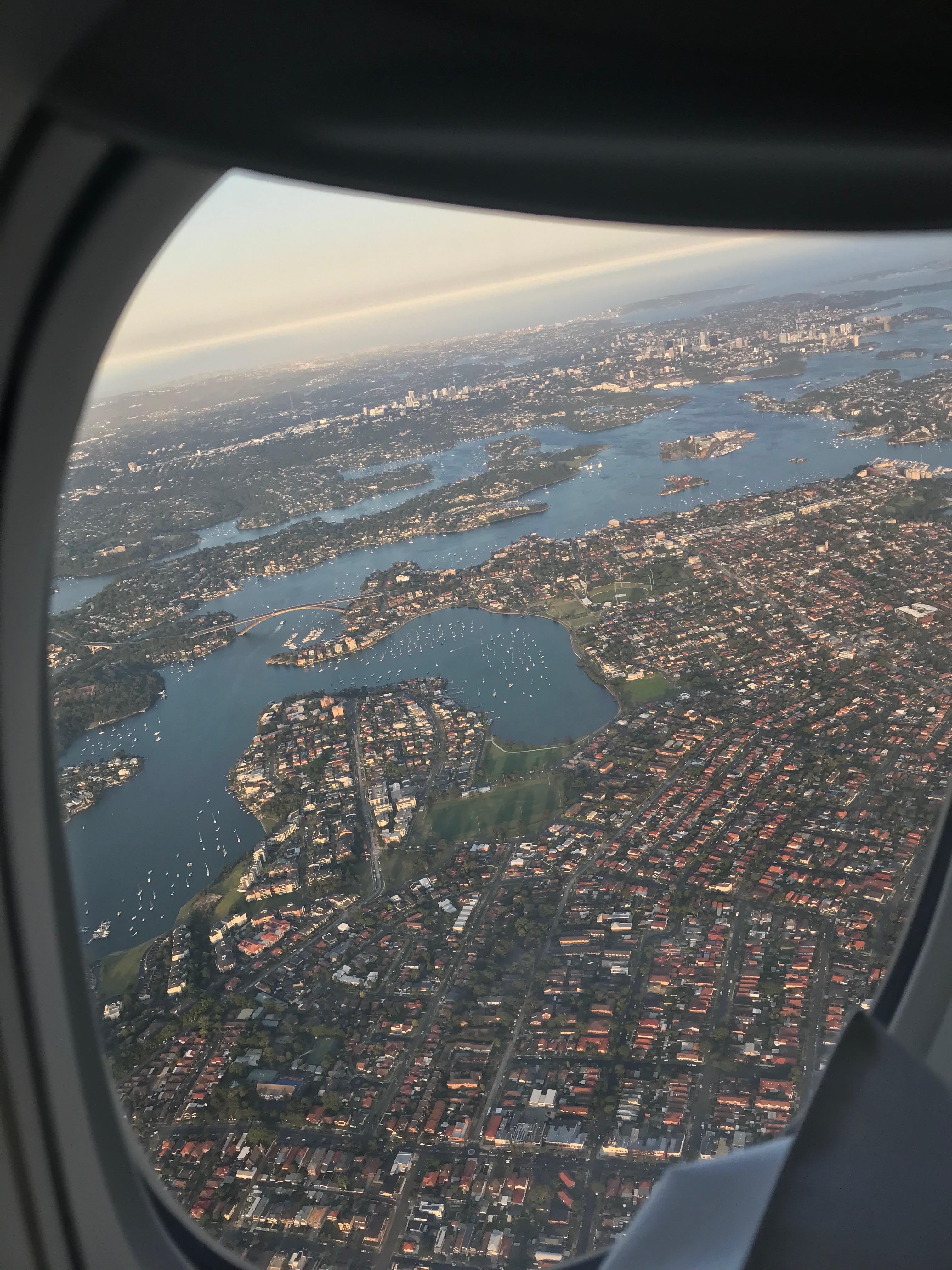 Climbing over Abbotsford and the Parramatta River; the CBD is off in the distance to the right.

At cruising altitude we were given arrival cards, as well as our drinks, accompanied by a ramekin of cashews. Before pushback, cabin crew came to us with requests for post-takeoff drinks, as well as our selection for dinner. 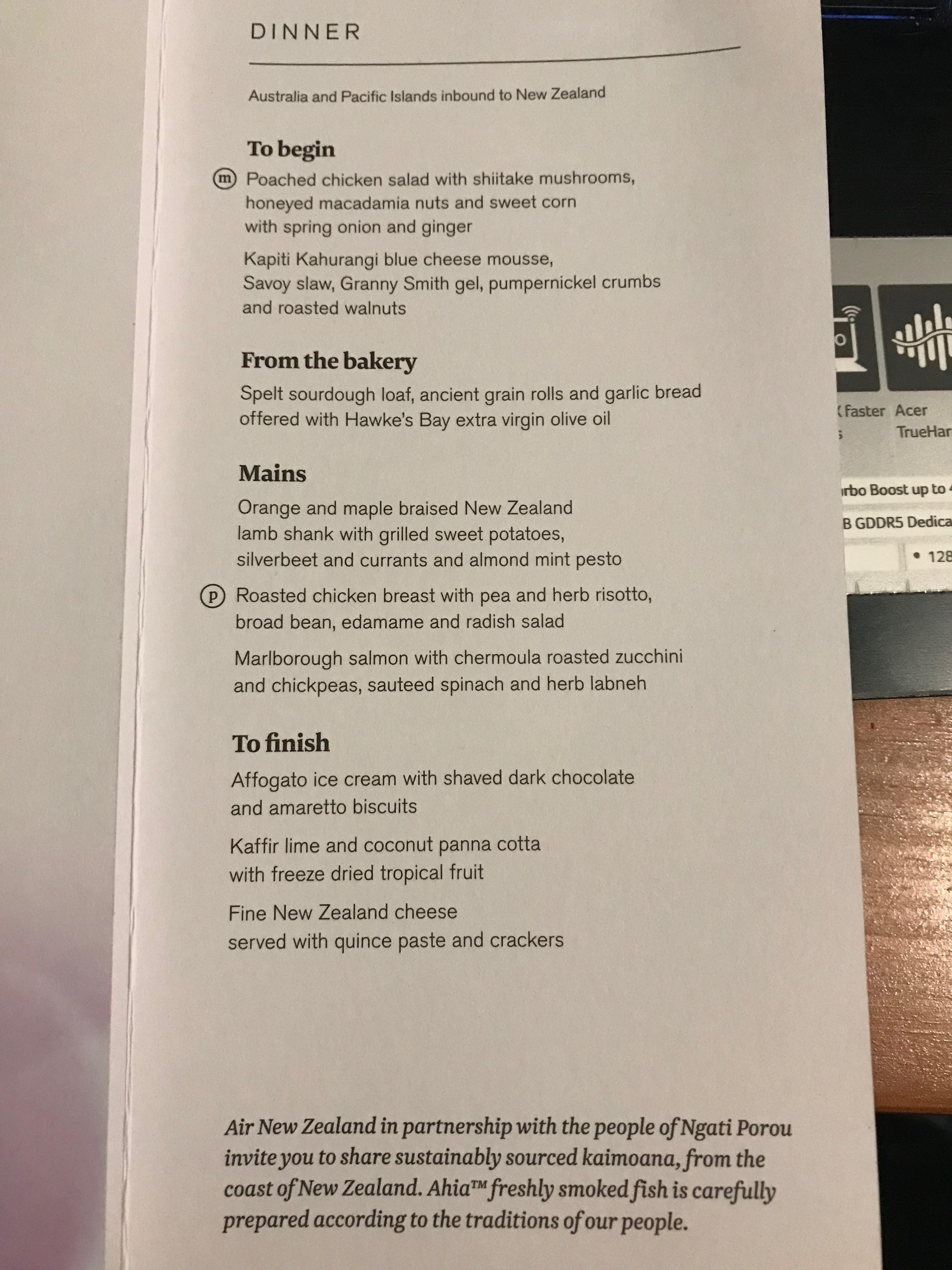 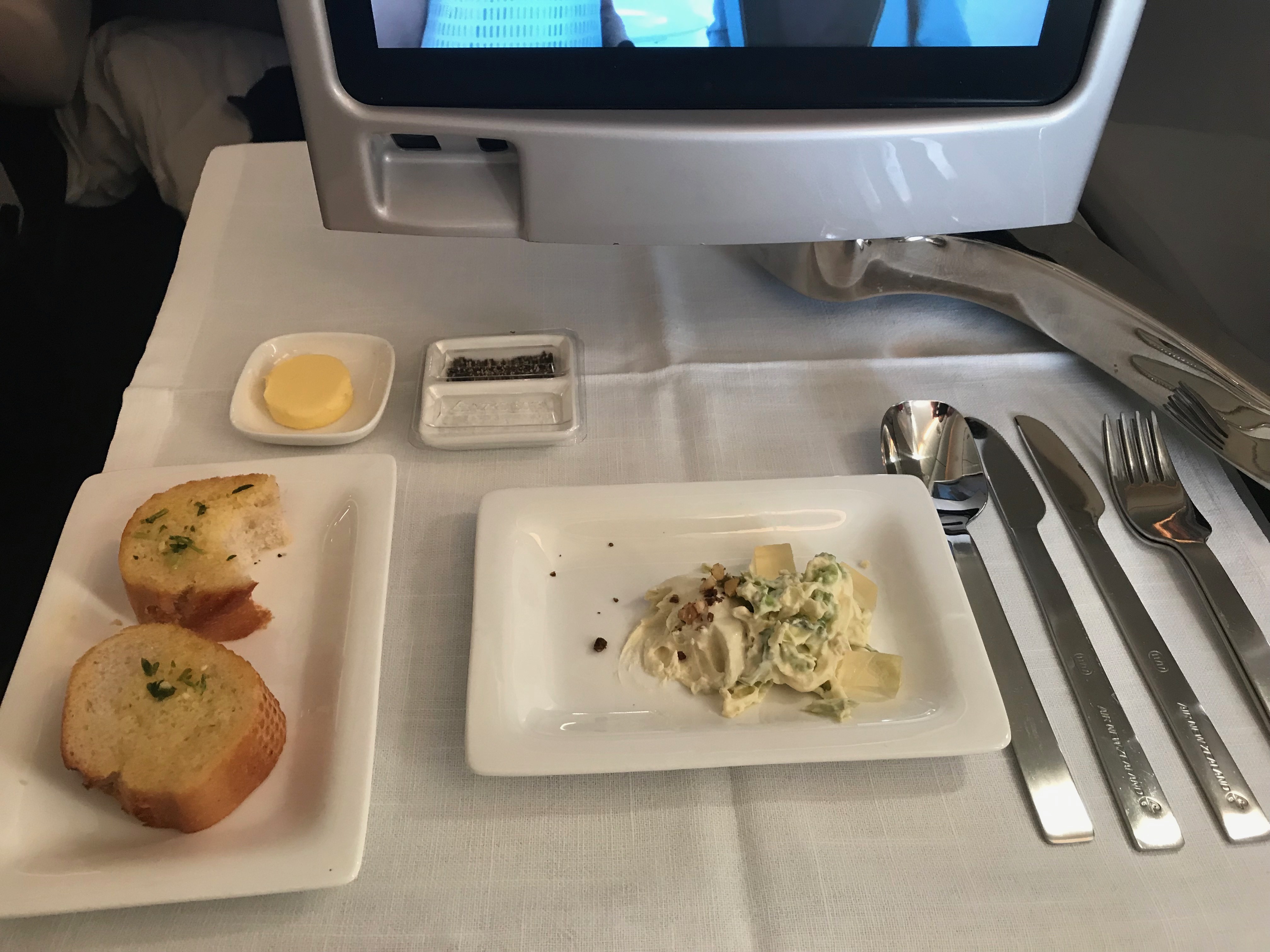 Kapiti Kahurangi Blue Cheese mousse with Savoy slaw, Granny Smith gel, Pumpernickel crumbs and roasted Walnuts. It's weird tasting cheese in mousse form, on the whole the starter was quite nice. I did enjoy the Granny Smith gel (the jelly cubes); it went well with the mousse. Accompanying the starter was a couple pieces of garlic bread, which I already finished before the main course came. 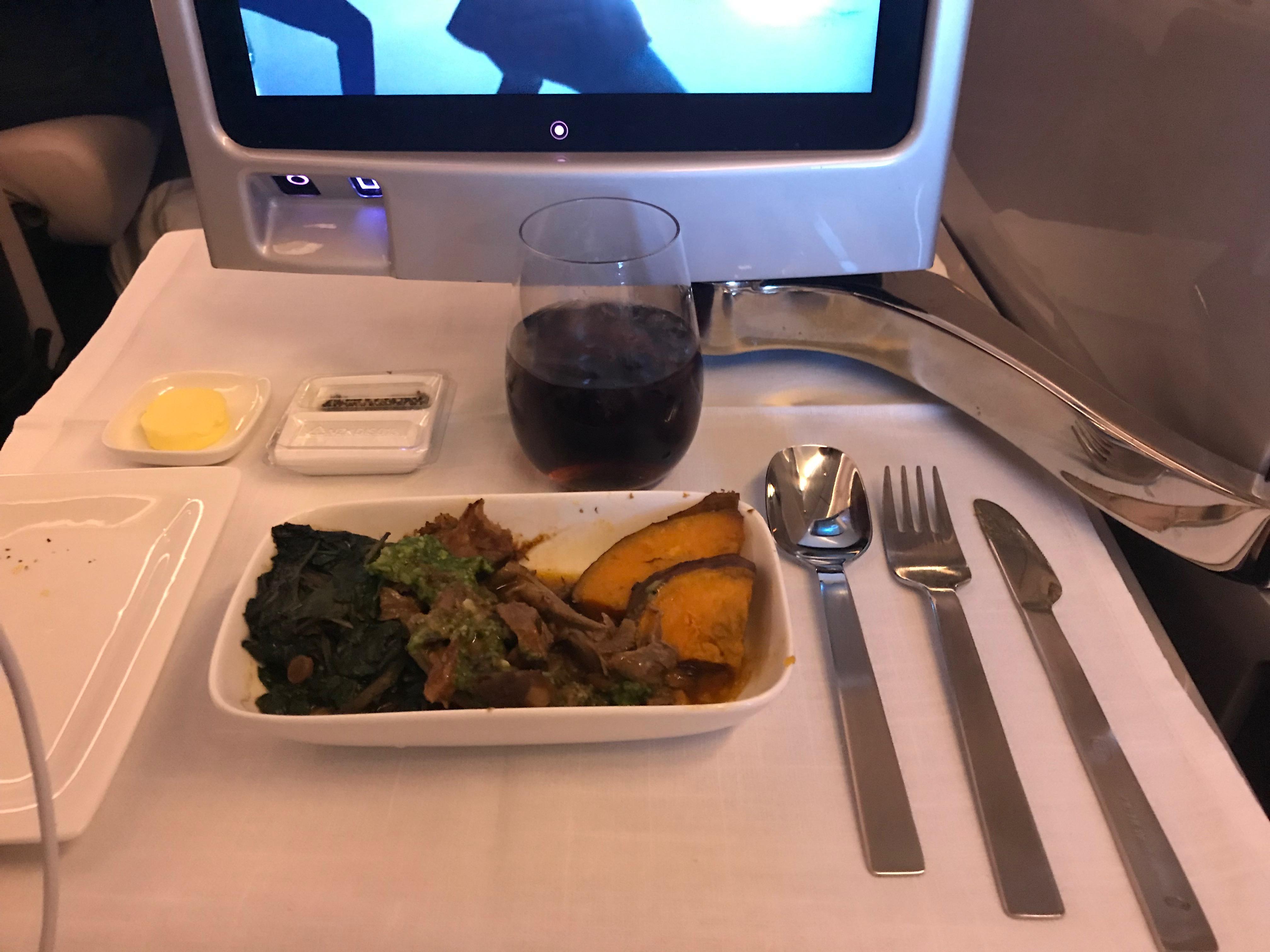 My main: Orange and Maple braised NZ Lamb shank with grilled Kumara (sweet potatoes), Silverbeet and currants and Almond Mint Pesto. I'm just thankful it's all cut up and not an actual Lamb Shank. I've never tasted Silverbeet before; smothering it in the juices with a little bit of lamb tasted delish. I tried, but I couldn't taste the pesto that much. Kumara is kumara; it's always delicious. 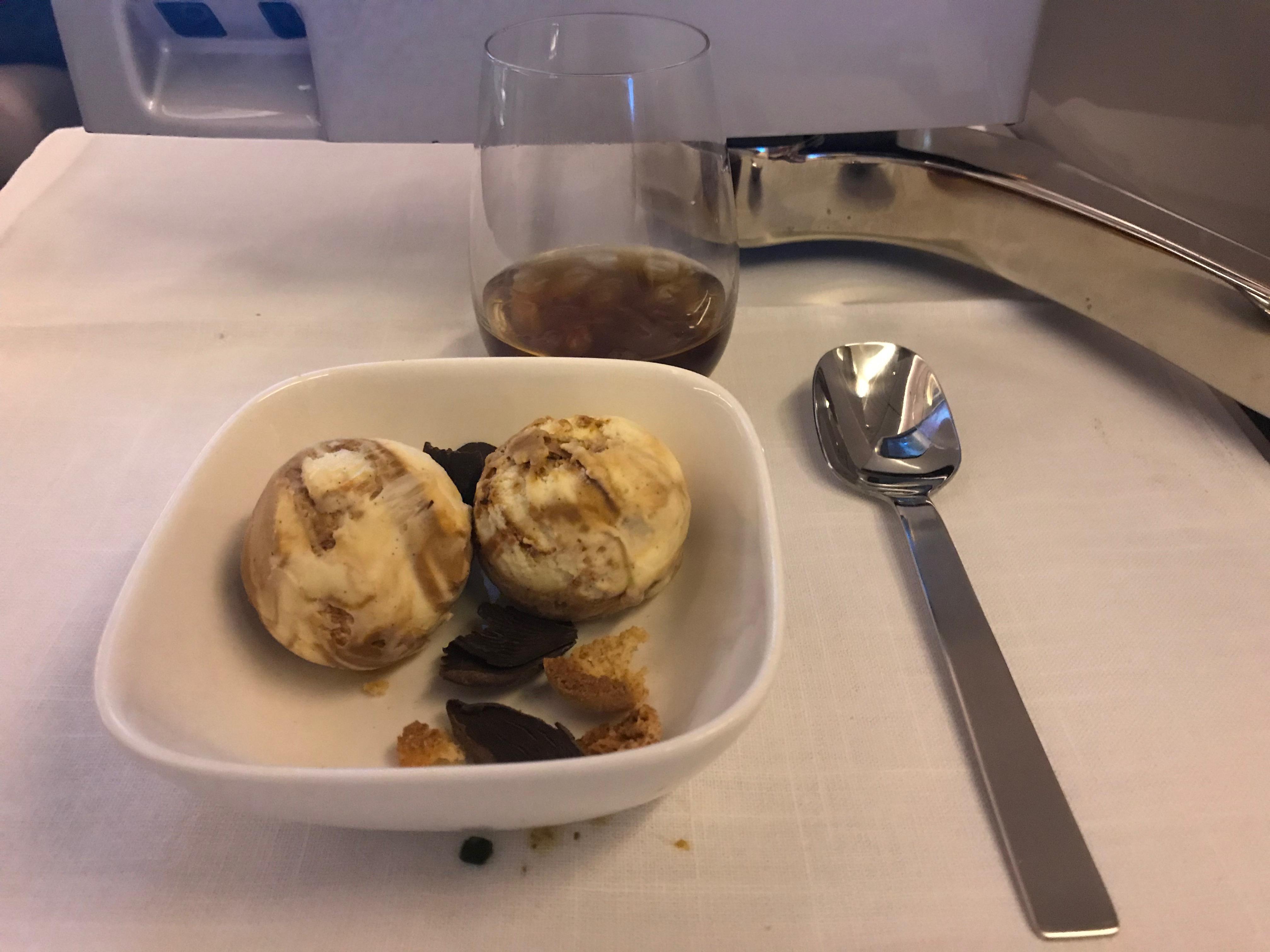 Dessert: Affogato ice cream with shaved dark Chocolate and Amaretto biscuits. You can never go wrong with ice cream; with the half-empty business cabin, I should've asked for another!

During taxiing and takeoff, I occupied myself with the latest episode of the West Wing Weekly, pausing to take a few photos (see above). For most of the flight I watched the two remaining episodes of Doctor Who that were available on the IFE that I've not seen yet (The Tsuranga Conundrum and Demons in the Punjab), plus the pilot episode of Wellington Paranormal (What we do in the Shadows spinoff) just before descent.

Upon reaching crusing altitude, the inflight wifi was switched on. In order to sort out the kinks in the wifi as it is installed across the whole fleet, Air New Zealand made it free on all international flights until the end of February. I tried it out following the dinner service; I managed to post a few images to Facebook and the AE gallery, look up the reviews for Demons in the Punjab, download a couple West Wing Weekly episodes and track the flight on FR24 towards the end of the flight.

From time to time, I chatted to my family via the SeatChat feature; mainly to check up on them. 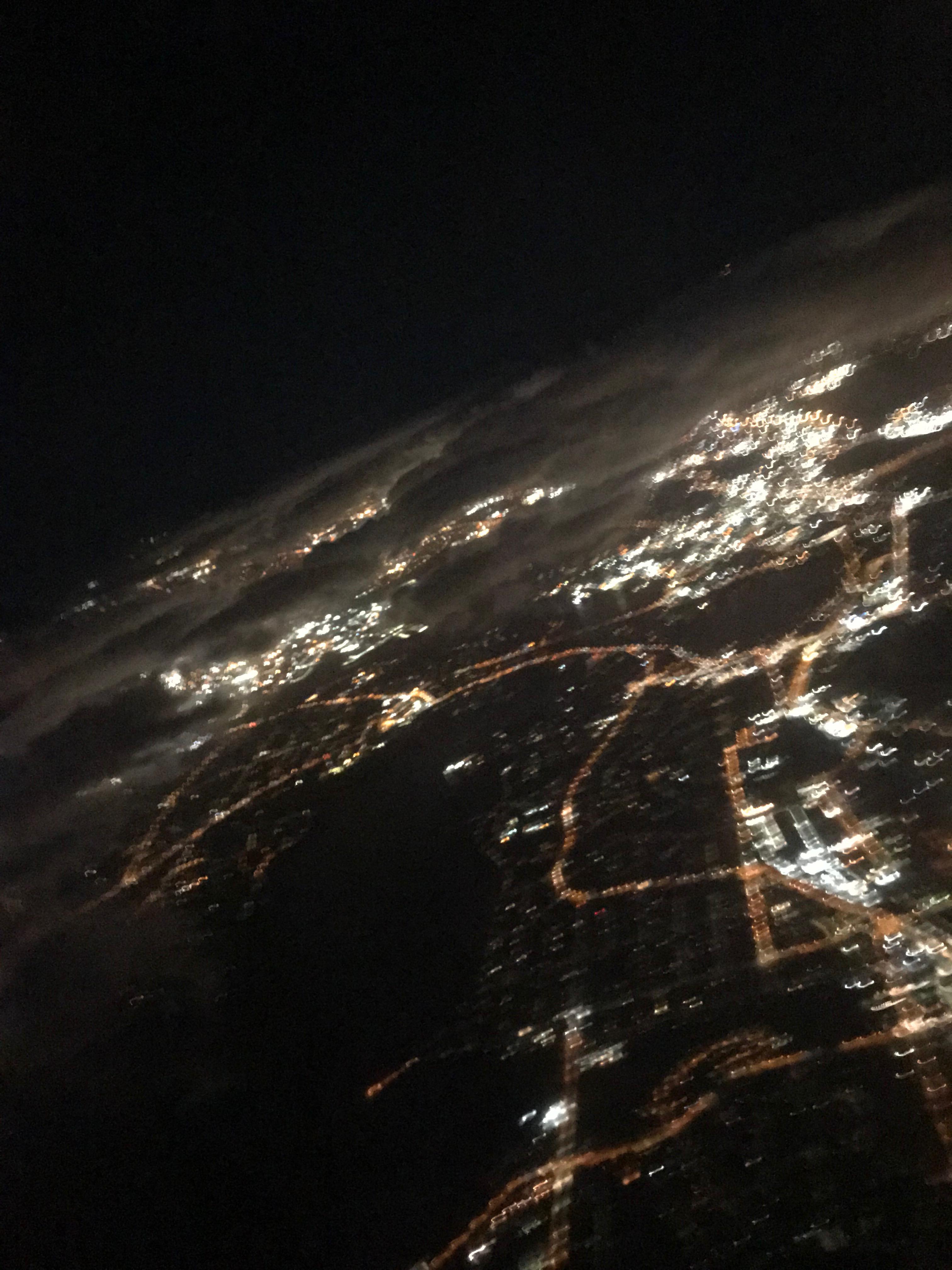 Prior to descent, cabin crew offered the usual bowl of lollies and Whittakers chocolates. Our arrival took us east over the Auckland CBD before turning south over Beachlands and Maraetai, lining up for approach around Whitford and Flatbush before landing on Runway 23L around Midnight local time, parking at gate 8 a few minutes later. 30-40mins later with duty free in hand, we were all out of the airport.

Wow
Really really elaborate and sophisticated trip report
Recommend you post it on airliners.net it is one of the best, most intricate I have ever seen, may even be better than travel magazines.

2
I would, though I feel like I need to take more photos if I were to post on A.net