AE, for the ones of the Scandinavian sort - Aviation, News,

Hell, if the Oceanians can, why can't we? Gathering all the Scandies of AE...

I'll begin with some aviation. But feel free to write about anything you like.

Due to wet conditions and windy weather, an Amapola Flyg ( Swedish cargo airline, flies postal services ) Fokker 50 overskid the runway at Malmö Sturup Airport. There was no serious damage to the plane and none of the two pilots were injured thankfully. Altough flights to and from Malmö have been cancelled from the accident until 9pm today..

Pfft, ours will remain victorious

Guest_Eastwind CEO_*
Pfft ask to make this a subforum

Pffft I rather use SAS.

Pfft, ours will remain victorious

The Oceanian Aviation topic is very nice indeed. Perhaps not thanks to you but it's well organized, on topic and active. However I see no point in coming here advertising that fact. Please try and stay on topic about Scandinavian news. Thank you.

Yours is very nice indeed. Perhaps not thanks to you but it's well organized, on topic and active. However I see no point in coming here advertising that fact. Please try and stay on topic about Scandinavian news. Thank you.

I object to the implication it is in any way his.

I object to the implication it is in any way his.

Oops, sorry. I have edited it.

A Norwegian Air Ambulance EC135 helicopter responding to an accident possibly came in contact with a power cable and crashed. 2 Deaths have been confirmed as well as 1 serious injury

SAS CRJ-900 reg. LN-RNL evacuated in CPH because of smoke in the cabin. There was 4 crew and 24 passengers bound for Gothenburg onboard.

Since the SAAB - Brazil deal the Gripen seem to have become attractive to other nations aswell such as the Indonesian AF considering it and now Slovakia aswell. Slovakia are replacing their old Mig-29s and will most likely go for Gripens, sources in Slovakia say.

A link to the article (in Swedish) here

And SJ have announced an investment in buffing up the trains costing about 3.5 billion SEK. This will mostly go to renovating the trains and will keep train travel in Sweden an attractive choice, says the CEO of SJ. The money will go to increased punctuality aswell as renovating trains especially the aging high speed X2000s. Which the CEO says will once again be the best train for Swedish infrastructure. Article (in Swedish) here

Why must SAS ditch the MD80

Why must SAS ditch the MD80

Because the MD80 is a noisy, fuel guzzling monster, and SAS are a dying airline (money wise).

Good news for SAS, announcing its first annual profit since 2007 clocking up a net profit of SKr179 million after having totaled a loss of SKr15 billion from 2008 onwards. In 2012-2013, the airline had an operating margin of 3.3% with a pre-tax profit of SKr433 million, compared to a loss of SKr3.3 billion the previous year.

I do support a getting of a Scandinavian subforum

SAS has introduced a new business class which makes the personal TVs larger. The blue colour of the business class is also being replaced by a grey tints. People at SAS mean that this will be one of the better business classes on the market. In January 2015 the first A340 will be fitted with this class. The class will be in 1-2-1 config.

On an Emirates flight from Dubai to Arlanda a man tried to enter the cockpit. He got to the first class section of the A330 screaming he had a bomb but was succesfully overmanned by crew and passengers. Nobody was hurt and the man responsible was arrested by Swedish police after having spent 6 hours on the floor of the airplane.

The 1000th 737 to roll off the production line with Boeing Sky Interior was recently delivered to Norwegian Air Shuttle. The 737-800, became 48th of this type to join the 3rd largest European low cost carrier, and the 2nd largest airline in Scandinavia. BMI Regional expands into Gothenburg Airport. BMI has told press that they see Norway and Sweden as very interesting markets. BMI Regional are already running a number of Norwegian domestic and Norway-UK routes. Aswell as Gothenburg - Birmingham and now flights from Gothenburg to Stavanger. The airline does not want to be compared to FlyBe Nordic, with it's main base in Finland which is now abandoning a lot of interscandinavian routes. Latest being Stockholm Bromma - Tallinn 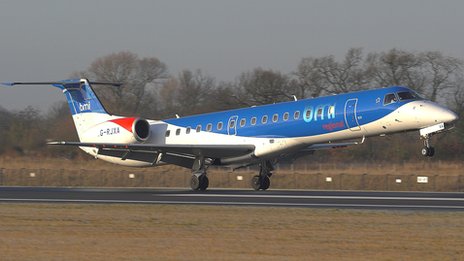 Back to AE Europe