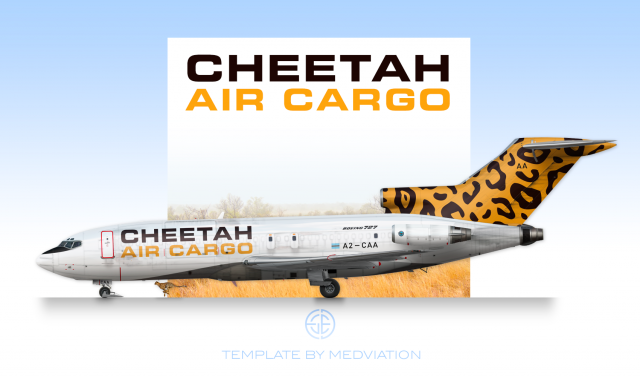 Cheetah Air Cargo was formed in the late 1990s to cover the need for express cargo delivery in southern Africa, with its main base being in Gaborone. The cheetah name and image was chosen both because it is a common sight in Botswana's savannah, and because of its speed. It has since been a mainstay in fast, on demand delivery all across the region.

The airline operates some old but reliable 727-100 originally put into service in the early 1960s by german Deutsche Hanseatic.

The 727's high performances, its ability to operate from poorly prepared runways with a gravel kit installed, and its overall simplicity make it the perfect aircraft for the task!

goddamn, it hasnt had a wash since it was made

This is really great, I absolutely love all the details, the dirt, the gear, and the livery itself. The little cheetah running under the plane is a great touch as well!