Vol Riviera is a regional airline based in Nice, in the French Riviera.

In 1993, Air France launched Riviera Compagnies Aériennes, a small domestic subsidiary, operating the ATR 42 on flights around France under the parent company's brand. Sadly, the airline did not find success, however, as Air France was on the brink of merging it back into themselves in June 1995, they were approached by a tour operator in Nice, who agreed to purchase the carrier, along with its fleet of 4 turboprops.

The group revamped the brand straight away, and the airline quickly grew successful, acquiring a further ATR 42-320 and 2 Embraer ERJ-145 jets for longer services to Sicily and Corsica. In 2019, the firm contacted a Paris-based design company known as Ciatos for assistance in refreshing the airline's corporate image.

To reflect upon the carrier's base, a local icon was edited and used as a logo, and the decision was made to rebrand the airline completely with a new name and livery which better reflected the company's heritage. All aircraft are now named after local artists.

Great Northern Airways is a small regional outfit with hubs in Minneapolis and Grand Rapids. This is their livery from around 1992 on a Shorts 360 named Carlton Peak after the 3rd tallest mountain in Minnesota. It's nothing much to look at, but none of the smaller American regional carriers from this time really had much going on in their liveries. I guess if you were going to note a detail, I'll draw your attention to the flags of Michigan and Minnesota directly behind the front passenger door. Cheers and good luck to everyone else!

Charterwings is a Swiss charter airline based at Flughafen Bern-Belp In Switzerland.

With a fleet consisting of 7 Dornier Do 328 aircraft from which 4 have jet engines and 3 propeller engines, they operate charter flights throughout Switzerland, Austria, France, and Germany.

Jersey Express is the a regional carrier based in Jersey. It operates scheduled flights between the islands and the mainland UK. Jersey Express operates a small fleet of 15 aircraft containing of 5x D0328JET, 3x D0328PROP and 7x Do228s. Shown here is G-DJSS one of the oldest Do328JETs operated.

Summit Airways Corporation is an American based Regional Carrier Headquartered in Detroit, Michigan. The carrier began service operating the British Aerospace Jet Stream 31 for Saint Louis Based Airline, Osage Airlines, operating as Osage Connect. After the merger, operations consolidated into the Detroit hub operating under Air Crimson Airlink. The airline transitioned to using SAAB 340's and then onto using the Bombardier CRJ-200 to transition into jet service. The CRJ-200 currently makes up the Majority of Summit's fleet. The Aircraft below is one of the few aircraft in the Summit House Livery.

Only 24 hours left to enter your submissions!

Whitson Airlines was founded in 2011 at Bristol Airport with a single E140, offering daily flights from Bristol to London for business people whom needed to travel quicker than rail. After a successful start up, in 2013, Whitson acquired another two E140s and offered flights to Paris Charles de Gaulle and Edinburgh. In 2019, ten new routes were announced along with two CJ-200s. As of 2020, Whitson Airlines has:

Italair is a domestic Italian carrier, with their main base of operations at Olbia airport on the island of Sardinia in Italy. Currently the airline operates a fleet of 10 state of the art ATR 42-600s alongside 2 ATR42-200s. The airline started operations back in 2002 however with a close stint of bankruptcy in 2010 the airline managed to restructure and sold off most of its assets like 2 their A320s to recoup they operated their 4 ATR 42-200s from Olbia within Italy providing a vital connection around the entire region and in 2018 they ordered their first aircraft after 8 years the ATR 42-600.

Reserved for Cascade Airways (Always wanted to try a revival of that brand; only for this challenge; not canonical or tied to Rainier Air or Rainier Aviation Group)

Midlands Executive Aviation is a commuter airline based in Birmingham and offers both scheduled and chartered flights to important business centres in the UK, Ireland, and continental Europe with its fleet of Jetstream 31 and 41 aircraft. Due to the novel coronavirus lockdown, the airline has grounded almost all of its aircraft and there are rumors that it may be the subject of a takeover move by Air England which has long desired to expand its presence at Birmingham.

Ruby Airlines was founded in 2014 with 3 Cessna Citations, initially the business began as an air charter service for smaller groups of people and special operations, however the airline decided to change its business model in 2017 to offer a more luxurious and business oriented approach to regional and lower demand travel. It's corporate offices differ from it's operational offices, it's corporate offices reside in Huntsville, Alabama and the majority of it's operations are done out of Charleston International Airport with many destinations from the Southeast corner of the US to many major cities and hubs around the country and hopes in the future to offer service to Canada and Mexico and destinations in the Caribbean Islands.

After getting loans and investments secured, the airline has 45 leased Airbus A220-100's on order with 2 in service, The airplanes have a non standard A220-100 configuration as they are fitted with 50 seats in 2 fare classes, First Class (Ruby Executive) and Business Class (Ruby+). First class resembles a more typical international first class product and the Business Class Resembles a typical domestic first class product.

None of anyone's interest 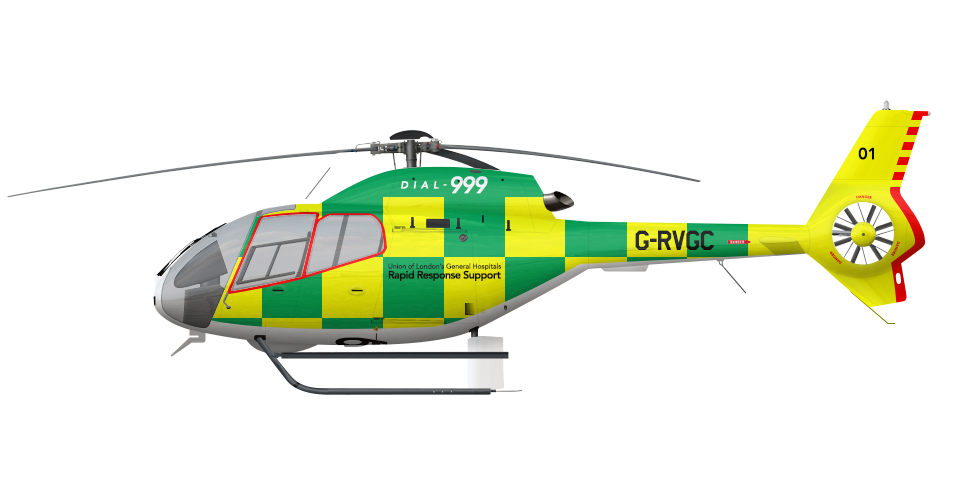 This submission is dedicated to those who lost their lived to COVID-19 and those serving at the front-lines of the crisis.

The deadline has now expired (I see some of you like danger by posting at the last minute haha), grading will commence and the results shall be published shortly, thanks for taking part! 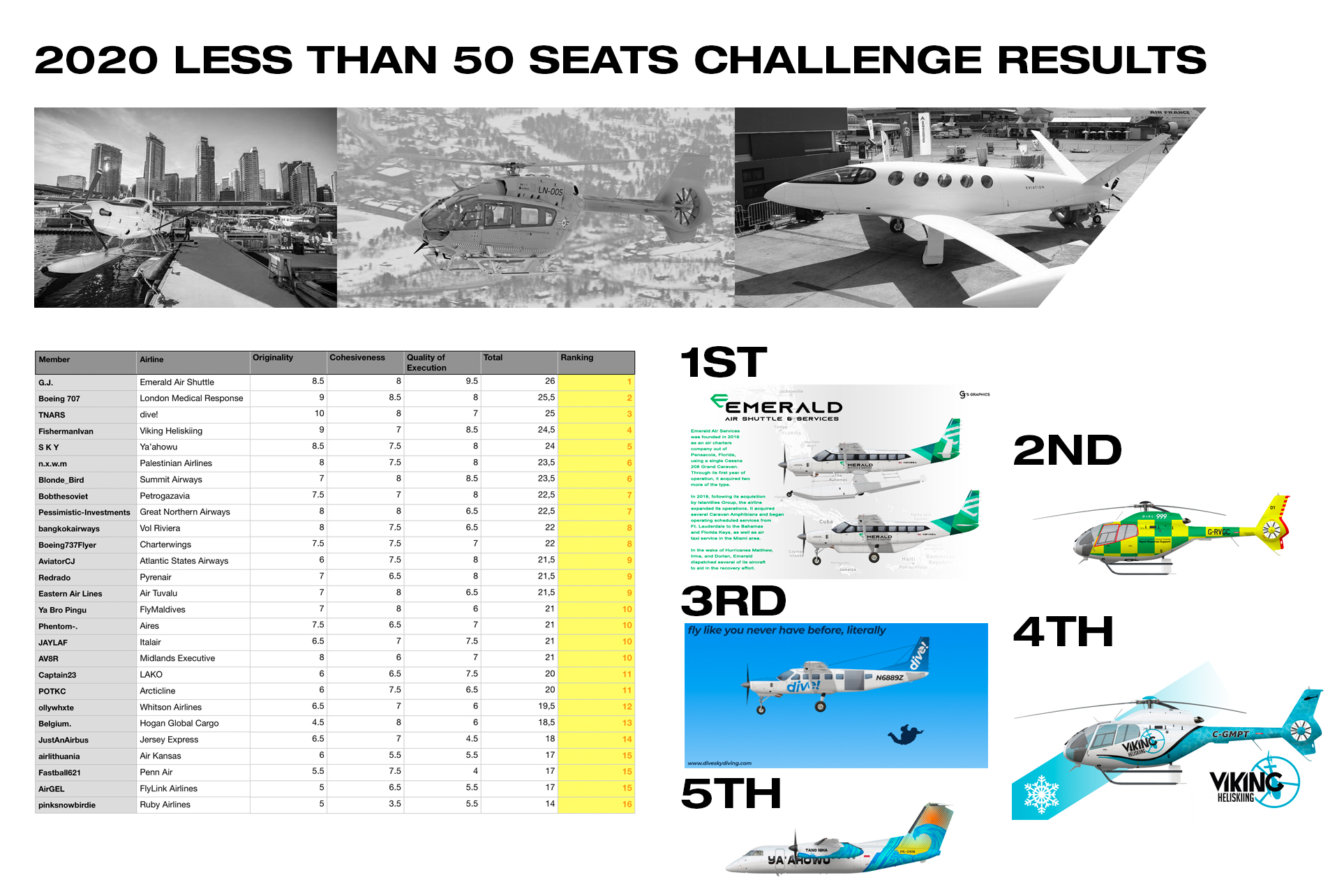 The results are finally here, thanks to everyone for the great attendance, I did not expect that many submissions! Everyone respected the rules which I'm happy with, some smarty pants even using the voluntary blurry lines with cargo airlines, business/first type of commercial airlines, and non scheduled aircraft, which is what I had hoped for! So good work to everyone, and especially to the top 5 contenders.

Regarding the judging criteria, originality was mainly based on wether it is an aircraft/airline/region/whatever we often see in the gallery, cohesiveness was about wether this could actually exist IRL and in this form, and quality of execution was about the effort and imagination put into both the design but also the story surrounding it, and the form in which it was delivered.

Full disclosure, the grades are a mean of mine + my friend's who is also a designer but does not participate in AE's forum.

In case of a draw, ranking is alphabetical.

I'm happy to give constructive criticism shall you want feedback, just don't flood my inbox.

Thanks to БобСоветскийшфид☭ for the great idea (and letting me steal his results page), and make sure to check the 2020 East Asia Design Challenge by Boeing 707 and n.x.w.m!

Wow, I didn’t expect 3rd place! Thank you very much, and good job for everyone who participated!