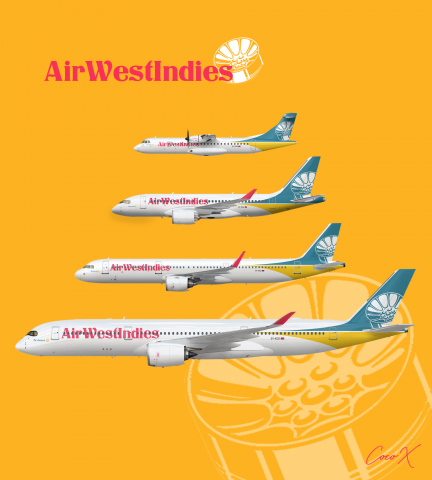 One of the youngest fleets in the Caribbean and one of the fastest growing, Air West Indies currently flies throughout the region maintaining long haul connections to the United States and Europe in addition to inter-island connectivity.

The flagship Airbus A350 was delivered in 2019 marking a return to operating widebodies since the A340 was retired in 2010 and flew its maiden route from Port of Spain to London Heathrow. Other newcomers include the latest generation of ATR turboprops for island hopping, Airbus A321neo for longer routes to the US and South America and finally the A220 for higher density Caribbean flights.

The airline is currently pursuing strategic partnerships with Jamaican Airways and Haitian Air with discussions of a possible merger between the carriers in the future.

Jamaican and Haitian on their way soon

I like this take on what could me the modern day BWIA!