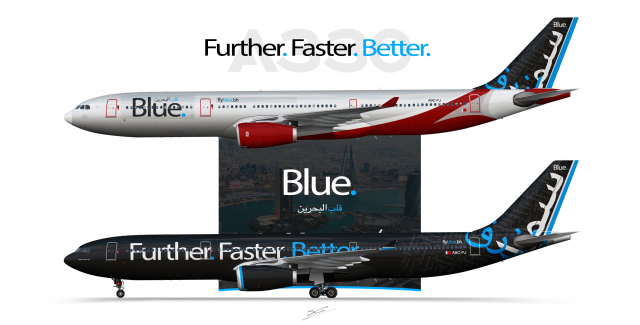 In 2015, as Blue. was going through the largest rebrand in its short history, the airline decided to launch premium long haul services. On October 29th, 2015, the airline started operations to London Gatwick airport with a used Airbus A330-300 previously operated by Yangtze Airlines, now registered A9C-PW. The airline obtained a second ex-Yangtze A330-300 in late November, and launched a second route to Paris Charles De Gaulles on December 4th. The aircraft, A9C-PJ, was supposed to be delivered months before, but a small fire ocurred in Yangtze's Shanghai hangar, subjecting the stored aircraft to further inspection and thus delayed delivery. Blue. executives decided to still launch the Paris route in December as scheduled, so the aircraft entered service in a hybrid livery for a few months until March, when it was taken out of service to be painted in full Blue. livery. However, when it finally rolled out of the hangar, it sported a new special livery, with the words "Further, Faster, Better." on the side of the fuselage. The airline had launched a full scale advertising campaign with the same name months prior, promoting the new A330 and their destinations. There were rumors about the airline considering purchasing Airbus A330-900neo or A350-900 jets, but as of today, A9C-PJ and A9C-PW remain the only wide body aircraft in Blue.'s fleet.