Pingu, Med for the Dash-8 templates, SirFlyHigh for the BAe 146 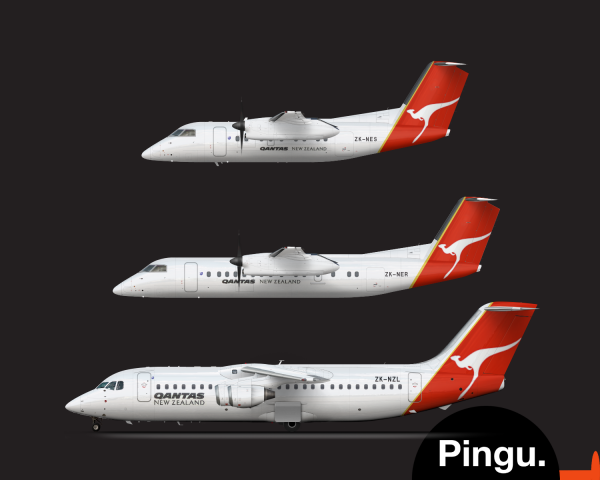 Ahh Qantas New Zealand. Founded on the dumpster fire of Ansett New Zealand when it collapsed, yet it only lasted 7-and-a-half months before ceasing operations. But hey! It lead to Jetstar operating domestic services! "How?!" you may ask. Well it's all about to be explained now!

Qantas New Zealand officially launched on the 4th of September 2000, operating the fleet of the former-Ansett New Zealand. This included eight BAe 146s, five Dash-8-100s, and two Dash-8 300s (don’t get confused, though these Dash-8 300s, ZK-NEQ and ZK-NER have both had their tail number used on Q300s for Air New Zealand, the two operated by QNZ are not the same airframes, they would go on to fly with Origin Pacific instead for a few years.). QNZ flew to/from Auckland, Christchurch, and Wellington, Palmerston North, Dunedin, Queenstown, Invercargill, Nelson, Rotorua, and Hamilton.

Sadly for QNZ, financial troubles would begin almost instantly, with rising fuel costs and decrease of the New Zealand Dollar ($NZ). As losses amounted upwards of $100,000 per month, the airline was put into receivership on the evening of 20th April 2001, only seven-and-a-half months after beginning operations. Passengers up and down the country on both islands were left stranded, and so Qantas Australia sent a 767 and 737-300s to repatriate the stranded passengers. However, the Qantas 737-300s saw so much service here that they actually ended up starting regular commercial operations domestically within New Zealand. This would end up becoming Jetconnect, and they operated domestically until 10 June 2009. However those services were replaced with Jetstar services, who continue to do so today (except for a gap in 2020 due to the Coronavirus pandemic/COVID-19).

Qantas New Zealand, while it did not last long whatsoever, still has left a major impact on the domestic New Zealand market, especially due to the present-day Jetstar services. And, we ended up receiving domestic/regional Australian-airline flights starting late-2015 in the form of Jetstar anyway. Hell, Jetstar might not even be operating in New Zealand today if it weren’t for QNZ, and Air New Zealand may have remained a monopoly with their ridiculous prices for such short flights. You could even say that this is thanks to Ansett, if you’re willing to go even further back.

Fun fact, the BAe 146s ended up flying in Air New Zealand colours for a few months, but I’ll cover that on a seperate post. In addition, most of the Dash 8s went to Origin Pacific, but they too will be covered on later posts.