Pingu, SirFlyHigh's mods to the (an) A350 template 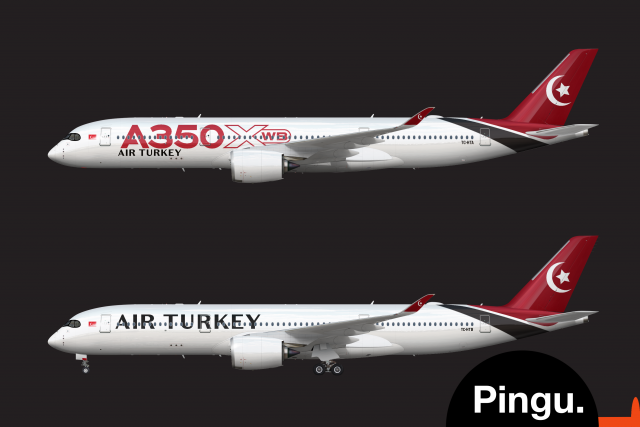 The first one arrived on 9 September 2016 with a large A350XWB decal on the from with the Air Turkey text below it. It first flew TY9/10 between Istanbul and Paris on 15 September that year. Since then, there have been an additional 8 aircraft that have arrived into the fleet, with a further 9 to go. However, Air Turkey has hinted at ordering upwards of 10 additional A350s, as they have purchase rights to an additional 13 of the -900s and 20 of the -1000s, and also they are very pleased with the type due to its flexibility (i.e. they can easily swap an A350 that's normally flying to USA to flying routes to Europe, for example) and range. They could potentially even be the 2nd A350-900ULR customer in the world if rumours are true.

Currently, the A350XWB family flies to Europe (West and North), the Americas, and over to East Asia. If the rumours become true and Air Turkey orders the A350-900ULR, then these will be sent to Australia ad maybe onwards to New Zealand, complimenting the 787-9'ULR's they have presently.

the first one with the A350 in red is really cool