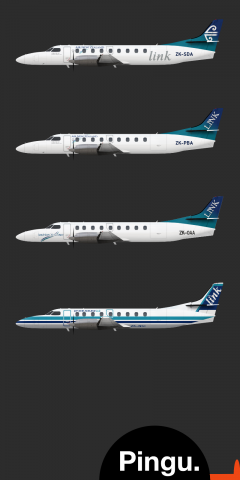 Oh, the Metroliners. I've heard it be called the "San Antonio sewage pipe", but putting that aside, (mostly Eagle Airways and Air Nelson on behalf of) Air New Zealand operated these things from 1988 up until 2003. Some of them were painted in unique variations of the 'Pacific Wave' livery, that were only seen on the Metroliners. As you can see, there are the two unique variants featured on the poster.

ZK-SDA: 1986 SA-227 Metro III | Eagle Airways | Currently: Was last known to be operating in Australia as VH-SEF, but was cancelled from Australian Aircraft Register 1 April 2019, not sure where it is nowadays

ZK-PBA: 1983 SA-227 Metro III | Eagle Airways | Currently: Unknown, but fuselage was on display, located at a golf course in Palmerston North Airport around 2004, not sure if it's still there or what golf course it was at even

Thank you! Added some extra details about the 4 metroliners

Here is a high quality version of the metroliner poster: