The Republic of Koquwa - Flag Cover

The Republic of Koquwa and all related © AirplaneNiner 2020, 2021. Flag, background and dove are free-to-use stock images. 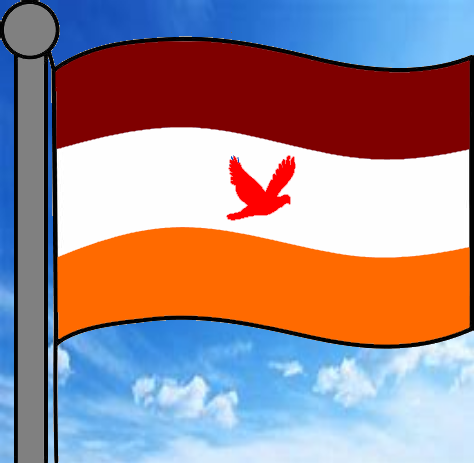 Disclaimer: This region is purely FICTIONAL, and none of it is real. Any similarities are purely coincidence. Even the language is gibberish mixed in the style of African Bantu languages, but it may mean something in a completely unrelated language. Please don't roast me over this country, I literally thought it up when I was a kid, and added more to it over time.
Edit: Changed name to sound more African and less gibberish.
Edit 2: Changed flag to look better.

This cover image features the flag of the Republic of Koquwa, a small but prospering country in southwest Africa, in between Namibia and Angola. The flag was introduced by Prime Minister Kanyo Abehlele of South Ckoqua on 18 March 1997, back when the area was split into two countries; the racist South Ckoqua, and the communist, guerilla-ridden North Ckoqua. After the gruesome Koquwan civil war between 1990 and 1997, the two countries were merged into the Republic of Koquwa, which took on after the South, but preserved the all-inclusiveness of the North. The flag itself was from South Ckoqua. The orange symbolizes that the country is forever, like the sunset sky, and the brown represents the life and culture of the country. The stock image dove represents the peace of the region, and was introduced in 2001 as an addition to the flag.

This album will feature the following:
- A map of Koquwa including the six main prominent towns, in between some pictures.
- A history, shown in aircraft templates, of the eleven airlines that have been in Koquwa between 1975 and 2022, including current, upcoming and deceased airlines.

Please blame the album and not me if these liveries are bad. I was inspired to do this from POTKC's Kingdom of Dhahran album, so huge thanks to him for that. I hope you enjoy the coming pictures!