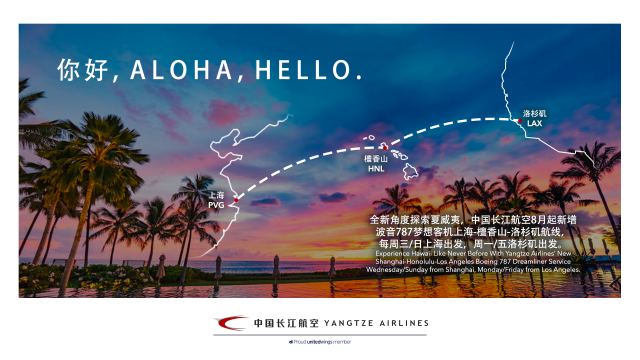 First in a series of ads in a 2019 campaign marketing Yangtze's relaunch of the PVG-HNL-LAX route, this time as YZ29/30 and operated by a Boeing 787-9 Dreamliner. Yangtze previously operated the PEK-PVG-HNL-LAX route from 2000 to 2004 as YZ10/11, but the HNL-LAX leg was dropped due to low passenger demand. The flight would then be replaced by YZ570/571 PVG-HNL A330 service starting in 2008. After the relaunch in August 2019, the flight was most often be booked as a multi-city trip, with Chinese tourists flying to HNL, spending a few days in Hawaii, and then travelling to the US mainland via LAX. Chinese tourists preferred the Yangtze crew and aircraft more than the American carriers' offers due to the absence of a language barrier, and Yangtze's Dreamliner being in general more comfortable than the 737s and 757s most American carriers use. UnitedWings partner Californian and interline partner New England Airlines also market and sell the HNL-LAX and LAX-HNL under their own flight numbers, which helped bring more passengers to these flights. The flight operated from August 2019 to March 2020, when the pandemic forced the airline to suspend operations once again. The airline plans on relaunching the flight in summer 2022.