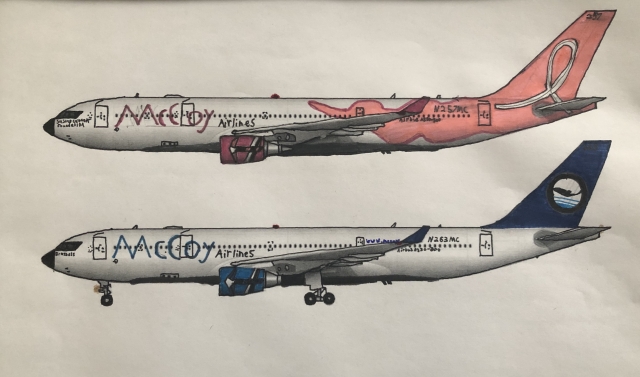 First to start off thank you guys so much for your kind words on the last post! Now on to the drawing here we have 2 of McCoy’s Airbus A330-268s, on the top we have N257MC in the Breast Cancer awareness Livery and on the bottom we have N263MC in the current colors, these 2 aircraft were delivered to the airline back in 1996 they are equipped with General Electric CF6 engines. Lore- During the 80s McCoy has been looking for a replacement for their very large L1011 Fleet (250 aircraft holy crap) and they had good luck with Airbus with there a300, A310, and their a320 so when the airline heard about a new variant of the a300 the B9 they were all over it and in 1987 when Airbus debuted the new A330 the airline was quick to place 50 orders becoming the aircrafts North American Launch customer. Fast forward to today and McCoy is the Largest Operator of the A330 series (both the -200 and -300) and have orders for both the A330-800 and the A330-900. There is a reason why McCoy loves these aircraft so much, from the decent range to the spacious interior the 330 is the airlines bread and butter, and it’s not just the airline that love it it’s also loved by the passengers, the current outfit of the aircraft features the new “Aurora“ seat for both business and first class cabins, the Aurora is the best rated when it comes to comfort and service.

Oh hey this is nice, you should try putting it on a template.

Ro it is on a template

I think he meant making a livery using Photoshop and templates.

I think he meant making a livery using Photoshop and templates.

oh ok honestly I prefer drawing over using a computer

Now try to put this on a med template so this will look even better!

Now try to put this on a med template so this will look even better!

Did you even look at this thread?