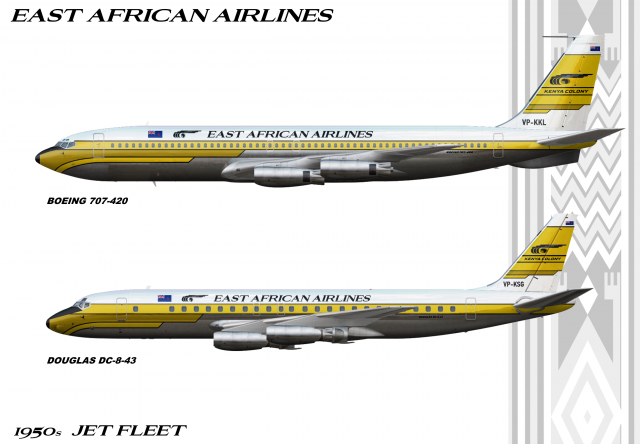 Being under the rule of the British was a major reality for Kenya in the 1920s all the way through the 60s. Due to this, EAA was split for it’s ownership. 49% of the airline was owned by Imperial Airways from the UK, and the rest was owned by the company of East African Airlines. This naturally led to the airline being heavily Rolls-Royce powered for the early years of jet travel. The airline had employed types such as 707-420, DC-8-43, and even VC-10 during its early jet years. The beauty of it was that all of these jets were powered by Conways, making maintenance much cheaper. Towards the 70s, these jets would be replaced by the Lockheed L-1011. The Rolls-Royce legacy would never wear off of the airline, even after the end of British rule.

The first jet, VP-KKJ, would serve loyally with the airline through 1968 where it would crash at London during heavy rain. The rain did not start the initial incident, an engine fire did. Improper navigation would lead to the aircraft not returning to the airport, causing a fire to consume the jet.
The second jet, VP-KSG, was delivered in 1961 to East African after not being taken up by a Pakistani airline. In 1997 the jet was stored at Nairobi airport. In 2000, the jet was ferried to El Salvador, where it would be abandoned indefinitely. You can still see the jet slightly off one of the ends of the runway, absolutely covered in moss and dirt.

(This was my submission for the 1950s competition, who woulda thought it.)
(Also this is the 50s livery on RR jets.)