Commencing operations in 2010 Moroccanair is a relatively new addition to the global market with a corporate mission of bringing Morocco to the world, services include traditional Moroccan cuisine and award-winning inflight amenities.

The fleet comprises of Airbus A320 series and Boeing 787 long haul services and finally the ATR 72 for regional internal routes. The airline expressed interest in the Airbus A220 in future orders.

The airline's latest livery was introduced in 2016 featuring a crisp and elegant scheme of classical artwork on the tail and a new colour palette of turquoise, mustard, sky blue and white. 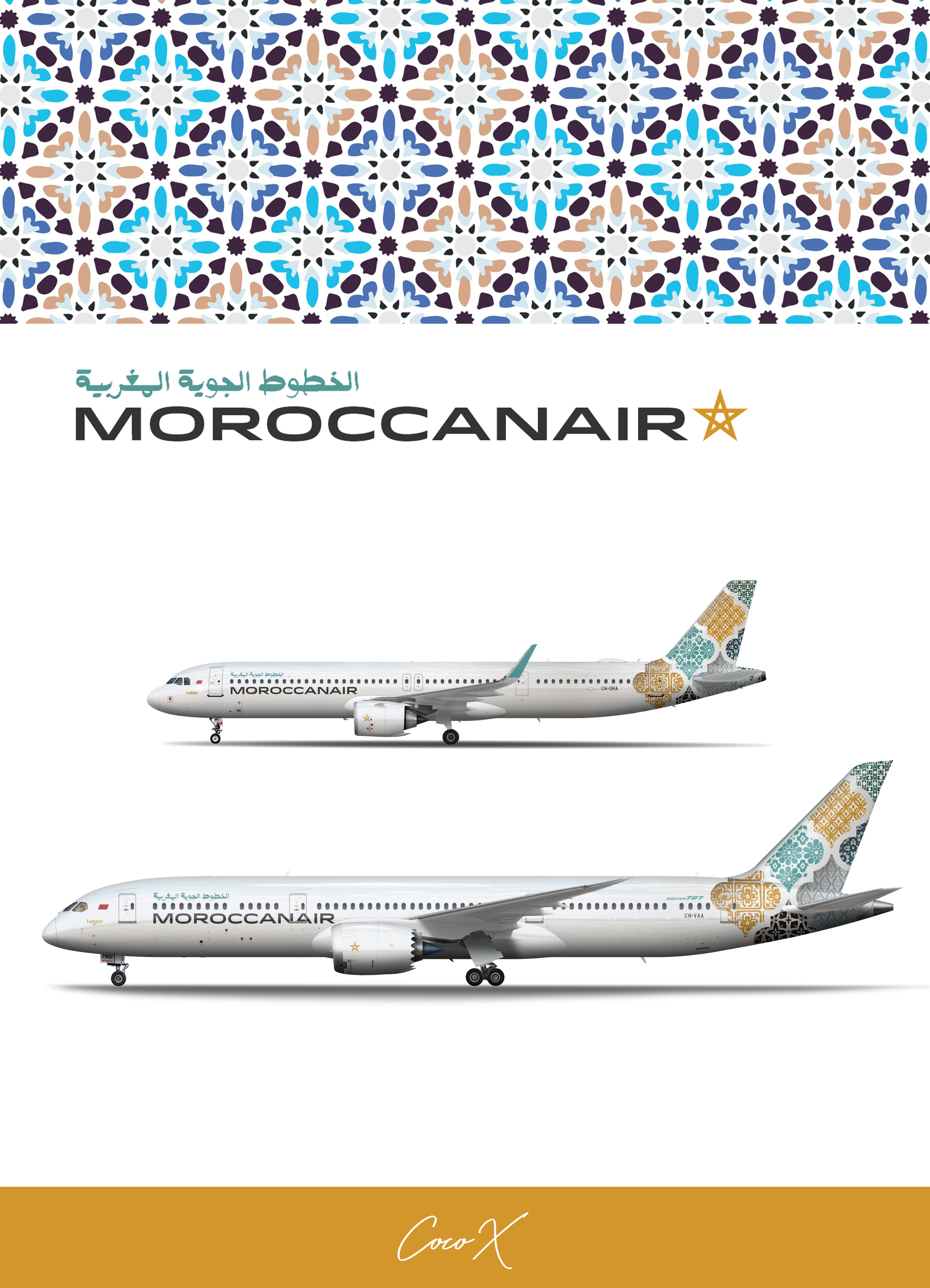 Nakhil Airlines is a Saudia Arabian LCC founded in 2006. As the country's second largest airline it operates out of hubs in Jeddah, Riyadh, and Dammam. The airline started with Boeing 737-300s and 757-200s, before moving to Airbus A320 family aircraft in the early 2010s. Airbus A330s and formerly Boring 767s are used for Hajj charters and on higher density routes.

North African Air Cargo is a Libyan cargo airline created in 1980. It was based out of Tripoli International Airport until 2018 when operations were moved to Mitiga International Airport after the former closed. Operations began with Antonov An-12s and An-24RVs, some of which are still in service. Ilyushin Il-76s were transferred from the Libyan Air Force in the 1980s in an effort to appear to be downsizing the military's cargo fleet (in reality the aircraft were still mostly flown by military personnel with military cargo onboard). During conflicts in 2014, 3 of the airline's aircraft were destroyed by shelling of the airport in Tripoli. The airline have been banned from the EU since 2014, along with all other Libyan airlines. Recently the airline managed to secure leases on Boeing 737-800BCF and 777Fs through shady business dealings. It is unknown who they are leased from, nor how the airline has the funds to pay the leases. Only time will tell how long the NAAC 737s and 777s will be around for...

Sudan Air Cargo was founded on February 3rd 1999 in Khartoum. This was during the Bashir Era. The airline's purpose was to move needed goods to the country and export gold, seeds, and oil. It started with three Douglas DC 8-63Fs. These aircraft were previously owned by KLM. In July, 2007 the airline purchased 2 more DC 8-63Fs to assist those affected by the floods. In 2017 the airline purchased 15 Boeing 757-200Fs to replace its aging fleet of DC-8s. The 757s completed delivery in 2020, just before the pandemic. Currently, Sudan Air Cargo owns 15 757-200Fs and 5 DC 8-63Fs. 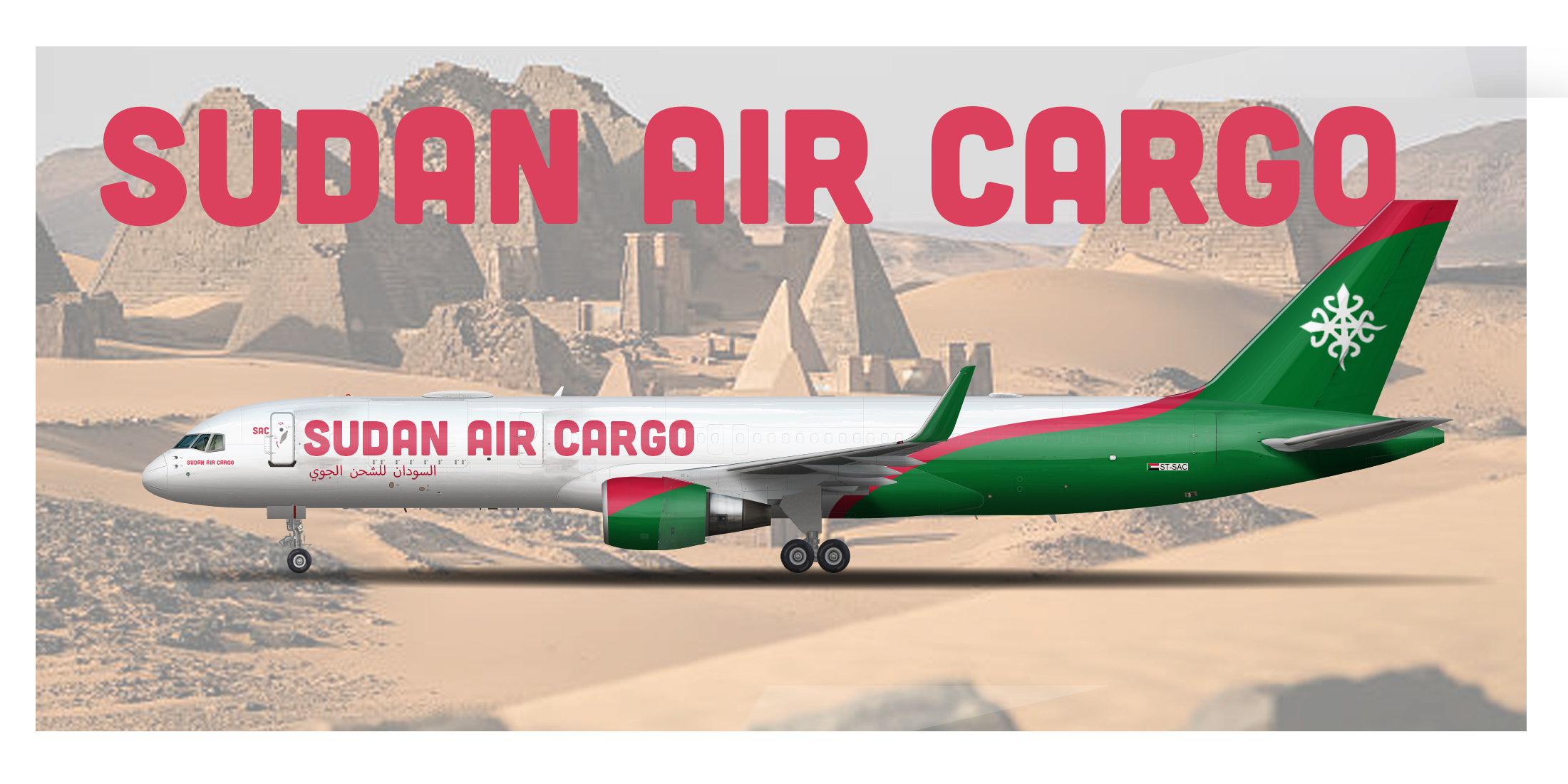 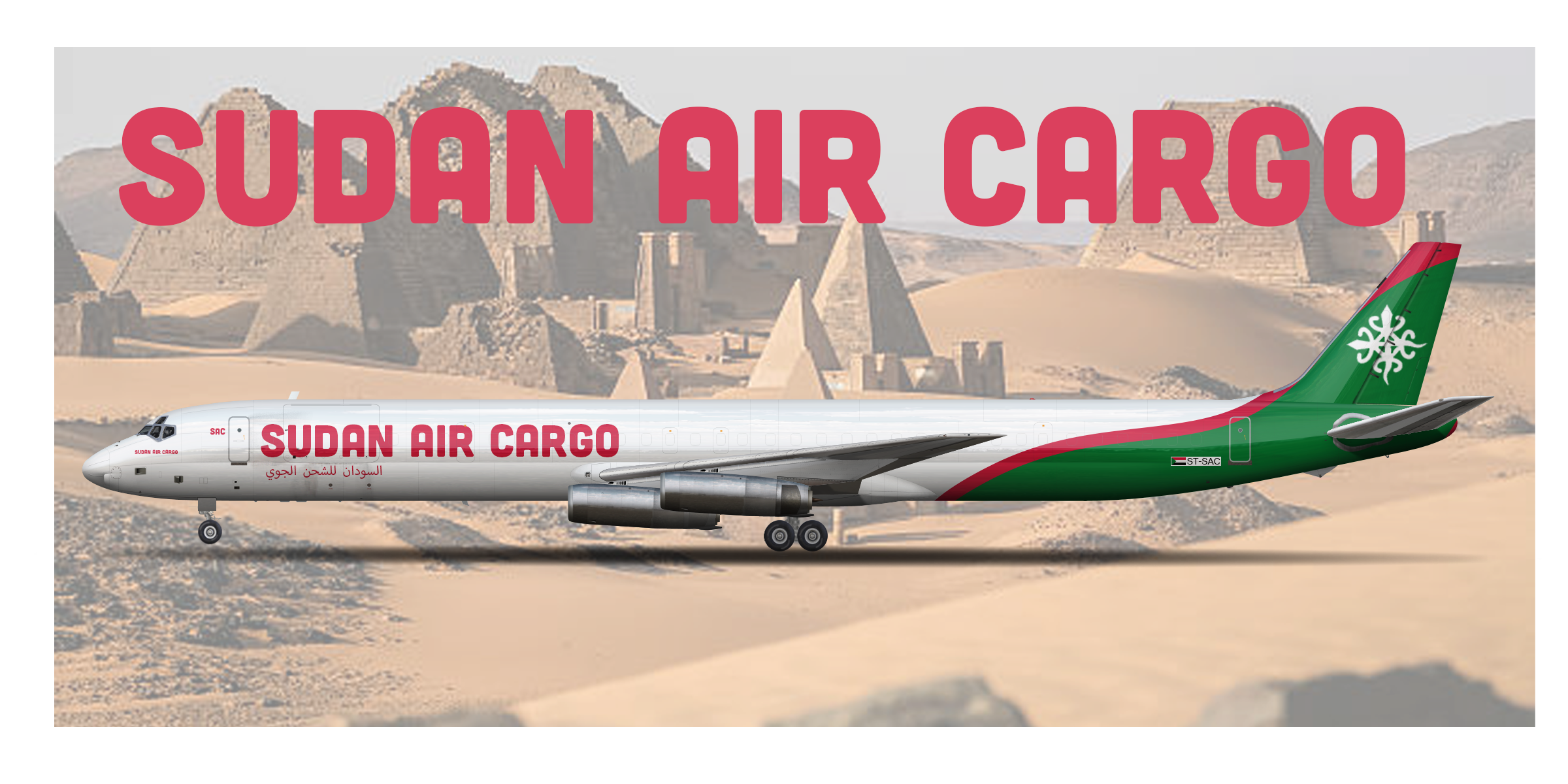 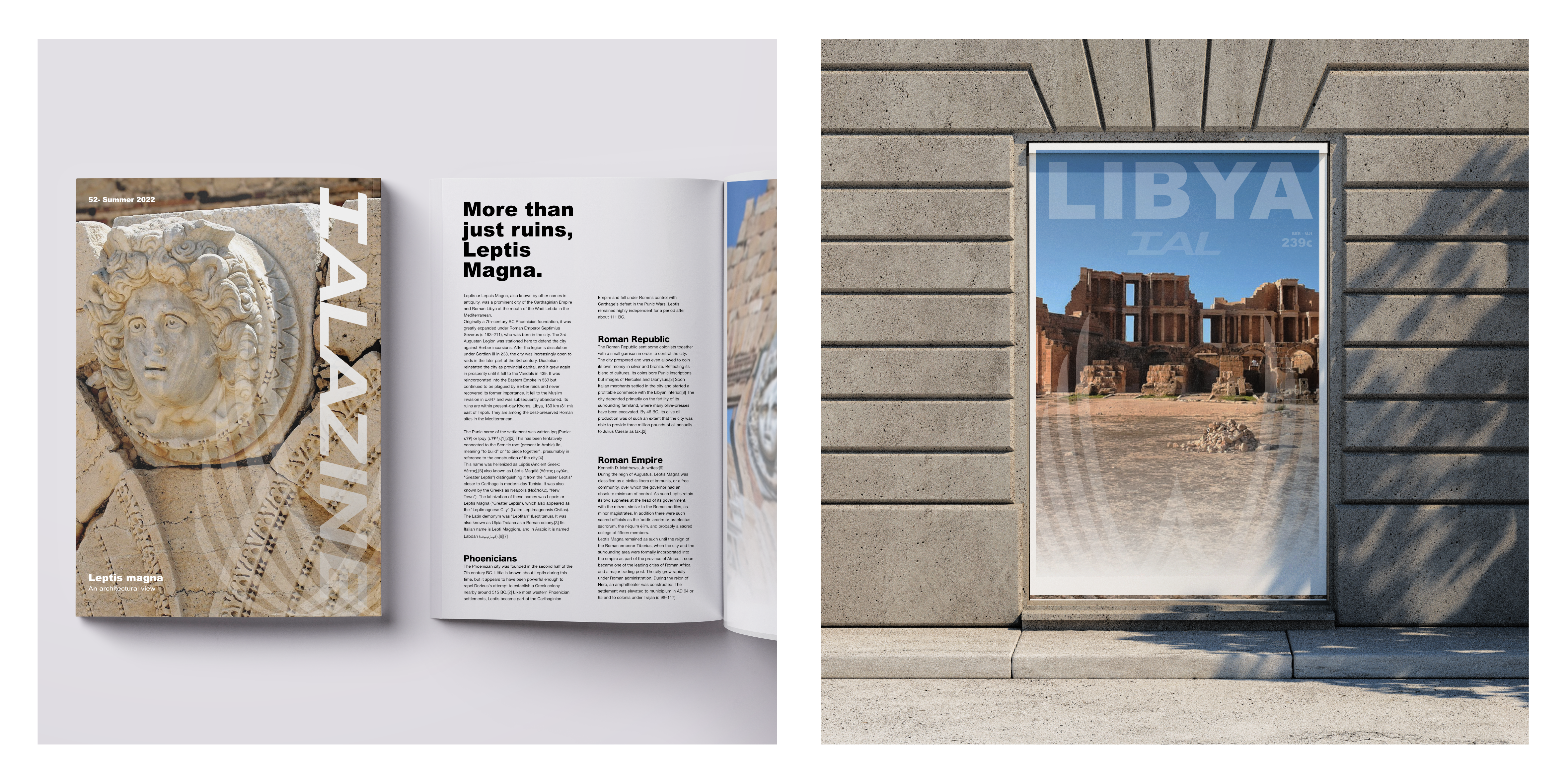 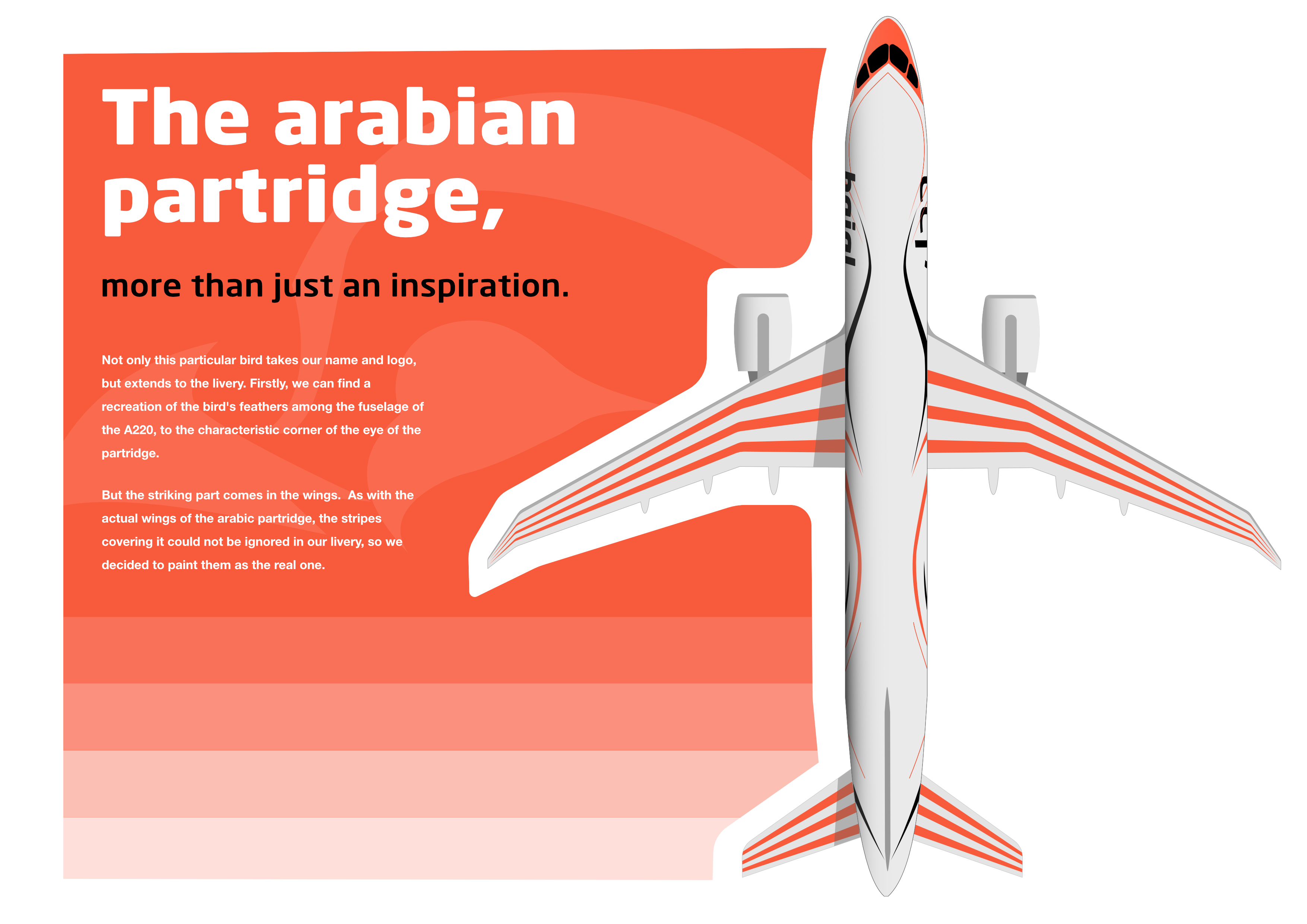 Fly Kuwait was founded in 1988 by a British millionaire who owned a bank in Kuwait City. But after a few years of general route fleet expansion the country of Iraq invaded Kuwait. During the Gulf War; Fly Kuwait suffered substantially as all flights were grounded. But after the war ended another airline called Air Kuwait had collapsed and they sold to Fly Kuwait for about $18 million dollars. The airline after that continued to grow and grow till it had a fleet of about 100 aircraft. The airline also grew to be the second largest airline in Kuwait (Behind the flag-carrier Kuwait International Airlines). But in 2020 with the pandemic the airline faced may tough choices particularly with routes to China. So Fly Kuwait closed all flights to Shanghai and Beijing. And then January of 2022 saw the airline open flights to Canada and to New York City. And now they plan on expanding to Chicago and order 10 787-8s.

Founded in 2009, after the failed attempt by the ruling family of the country headed by Sheikh Khalifa Ali Al-Sabah (President of the Airline) and AerCap, who would finance two Boeing 747-400ERF, for the start of cargo operations. Air to and from Kuwait, when there was a precipitous bankruptcy of the company and leaving the pair of aircraft already built, a new group of businessmen decides to rent them and start a new company "Dunes Air Cargo"
This is how the two long-range Jumbo Freighters initially scheduled for February and April are received, during the month of July and operations begin, with initial destinations in North America, Europe and Asia. Obtaining excellent economic results, two Boeing 767-300Fs were acquired the following year under the same agreement with the Irish lessor, and an additional order was established for an additional 767-300F and three reconverted 737-800s (BCF) for cargo support. nearby middle east and africa.
Currently, the fleet is made up of two 747-400ERFs, three 767-300Fs and three 737-800BCFs. It is expected that the first of two Boeing 777-Fs will arrive next August to strengthen the longest routes and higher load.

Special thanks to MED, Airplano21, M31MK for the respective templates.

Djibouti International Airlines is the largest airline in Djibouti. It was founded in 2002, with a single Antonov An-2R 'Coke'. It wasn't until 2005 that it got it's first jet aircraft which was a Bombardier (now Mitsubishi) CRJ-100ER. The CRJ family became central to the fleet of Djibouti International. Currently, they operate 22 CRJ family aircraft, consisting of CRJ-100ER/LRs, CRJ-200ER/LRs, CRJ-440s, CRJ-701ERs, CRJ-702ERs, CRJ-900ER/LR, and CRJ-1000ER/ELs. They also operate a fleet of ten Sukhoi Superjet 100 aircraft that were added between 2016 and 2021.
Group B: Airabic (JED)

Airabic's livery was chosen to stand out. The airline operates a fleet of 54 Embraer E175-200LR and E175-200LLs (54 is the combined total). It flies both domestically and internationally throughout the Arabian peninsula and Egypt.
Group C: Mawthuq Cargo Airlines (CAI)

Mawthuq Cargo Airlines was founded in 2020 due to increased cargo demand. It is based out of Cairo, and flies routes all around the world, many of which do not originate from Cairo. It operates a fleet of 6 Airbus A330-200Fs, and has orders for 17 more. Mawthuq also plans to add Airbus A320P2Fs in 2024.

Trans-Arabian Airways is a low-cost carrier based in Saudi Arabia. The company was created in 2012 by a small group of investors and Saudi Arabian Airlines. It operates short to medium haul routes throughout the Middle east and Europe. Their Fleet consists of 22 Airbus A321 Neo with 8 more on order. Because of the world gradually recovering from the pandemic, the airline has plans to lease Boeing 757s or 767s to open new routes to Asia and Oceania. 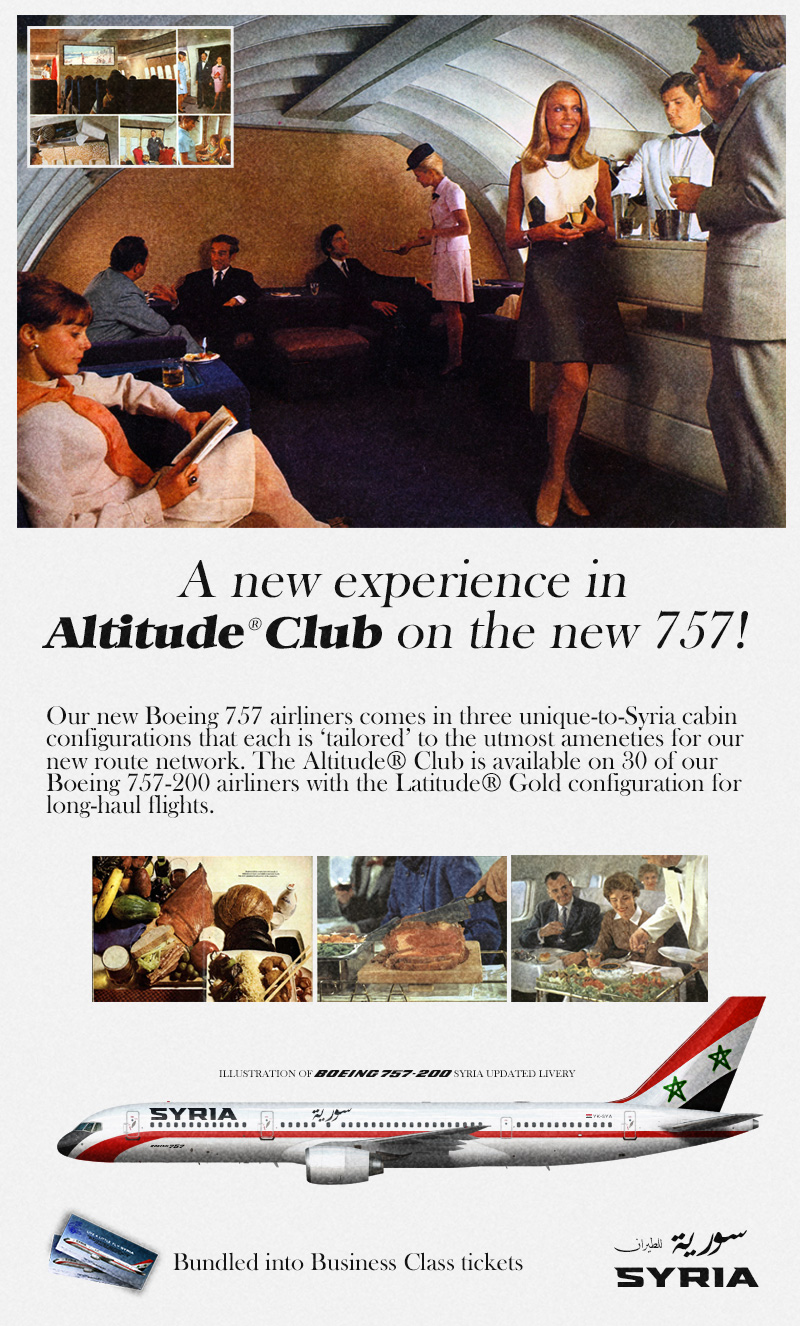 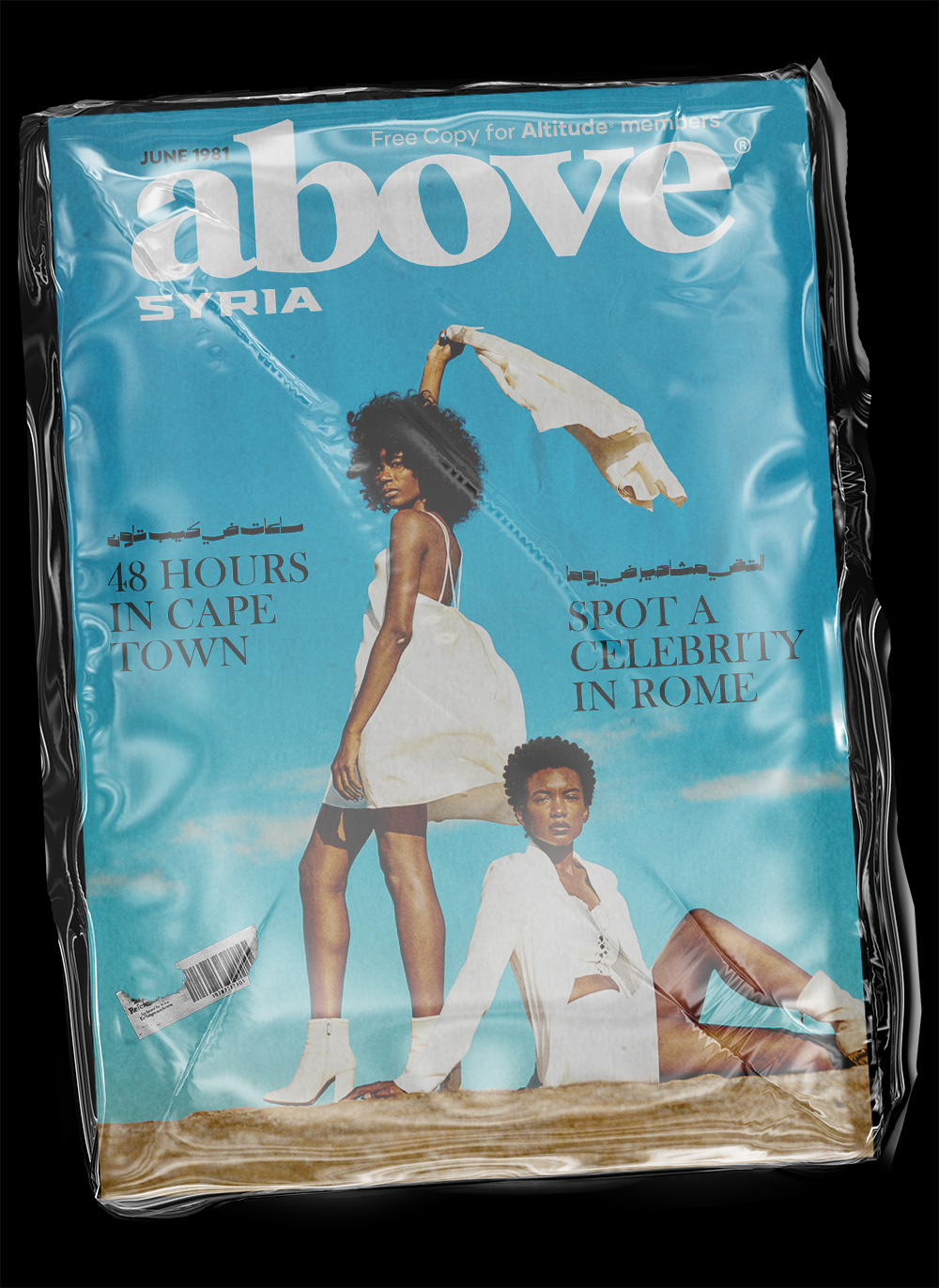 Amman Wings was founded in 1996 in Amman, Jordan. It started out as a small regional airline with select destinations in the Middle East and North Africa. The airline operates with an Airbus fleet of 12 A320neos, 6 A321neos and 4 A350-900s. The airline has largely stayed the same since its founding with the addition of flights to Europe, Asia and the USA. The airlines destinations out of the Arab World include, New York JFK, London Heathrow, Paris CDG, Amsterdam Schipol, Rome Fiumicino. Seoul Incheon and Tokyo Haneda. The airline is seen as an up and coming competitor the the ME3 airlines.

Mauritanie Airways is the flag carrier airline of Mauritania. Its main hub is located in Nouakchott Oumtounsy Airport. The airline was created in 2011 due do the demise of the previous flag carrier, which created a gap in the country's passenger market. As of now, they currently only operate short to medium haul services, but they are planning to begin long haul flights in late 2022.

This aircraft is 5T-MLS, a 4 year old 737MAX 8 delivered to the airline in April 2018. It has recently returned to service after a 2 year long grounding of the aircraft type. This aircraft is named "Abidjan".

Banner.png   137.12KB   0 downloads
The airline was established in November 2000 by Mohammed Habibi and started operations on 16 June 2002, when it began scheduled passenger services from Jeddah to Riyadh and Dammam using a leased Airbus A310. The fleet quickly expanded with the dry-lease of 16 Airbus A320, 4 Airbus A321 and 2 Airbus A330-200 for Charter flight.
Current fleet
As of June 2022 the JeddahJet fleet consists of the following aircraft:

Royal Qatari Airways was founded in 1991 as the flag carrier and largest airline of Qatar. The airline started out by flying half a dozen A320s to various Arabic destinations, but rapidly grew into the major international airline known today. From it's hub in Doha, the airline flies to 200 destinations across all six inhabited continents. The airline is world renowned for catering and service along with it's industry-leading hard and soft products. The airline is also well known for the soft power it exerted to try to maintain it's Arabic Gulf routes during the Gulf Blockade.
The airline is run by Doha-based Qatari Airways Group, but the government of Qatar holds a majority stake in the airline. The airline has expanded aggressively in the past two decades, which has made people skeptical about Qatari Airways Group's claims that the airline has made a profit without government funding. (Apparently, paying very little airport fees at Doha Hamad International Airport and having aircraft purchased on behalf of them doesn't count.)
As of 2022, the Royal Qatari's fleet is comprised of:

Pictured below is one of the airline's A350 aircraft featuring the FIFA World Cup Qatar 2022 logo.

CairoAir, Formerly RiverAirTransport is a privately owned freight and logistics provider based out of Cairo handing both corporate and private freight and freight forwarding services to destinations both domestically and internationally. Their all Boeing freighter fleet consists of the 727-200BCF, 737-400BCF, 737-800BCF and the 767-300BCF.

Cairo Air was founded in 2005 by James Martin III a English businessman of Egyptian decent who had worked for the german freight carrier GAC for the last decade looking to start his own freight airline moved to Egypt and founded RiverAir (later renamed CairoAir) with a fleet of two Boeing 727 aircraft. The airline would undertake private contracting and freight forwarding services for the first years of their operation with around 100 staff members. As the fleet grew the company changed their direction starting to sell space on their planes to parcel companies and later offering

parcel services themselves by opening their first offices in Cairo which allowed people to drop of cargo they wished to ship directly to the airline as well as signing agreements with major companies to take on their shipping needs. In 2015 CairoAir rebranded and introduced their first 767-300BCF to support their International routes also opening up cargo services to the United States through their pre-established Amsterdam base.

In 2017 the airline came upon their first hurdle after managing to stay afloat through the 2008 financial crisis their owner and CEO was killed when one of the airlines 727 aircraft crashed while taking off from Istanbul airport in Turky after the aircrafts number 2 engine detached from the aircraft on the takeoff roll causing a loss of hydraulics. The accident was ruled as being the fault of the aircrafts pilot for not properly inspecting the plane before takeoff and the Turkish maintenance facility for not properly re-installing the engine. The airline was also investigated by the FAA in the United States after one of their 767-300BCFs caught on fire on the ramp while parked at JFK leading to the aircraft being grounded for two months for the investigation and repairs to the affected components. The fire would later be ruled to have been caused by a improperly stored lithium ion battery. Even though the airline was struggling to battle legal disputes over the two accidents they still managed to set record freight numbers having moved 210,000 tons of cargo over the 2017 fiscal year. The companies VP would later be instated as CEO under the leadership of Anebos En-Atef the airline would establish their own maintenance facility capable of working on their dated aircraft. They would also acquire two additional 727 aircraft to be used for their parts.

Today CairoAir continues to prosper continuing to improve all sectors of their business and their global expansion and have vowed to lower their carbon footprint by replacing their older aircraft with 737-800 NG conversion freighters which are slowly being added to the fleet replacing their outdated Boeing 727 freighters already in service.