This aircraft is used on many routes like: Doha - Salt Lake City, Doha - Jeju, Doha - Seattle, Doha - Auckland, Doha - Jakarta, etc. With a specially designed interior for max comfort and style. In fact, 3 of our A350 aircraft have been decked out with 2 special First Class seat called: The Penthouse. These aircraft fly special business routes to Washington DC, Toronto, Frankfurt, & Berlin.

History:
The aircraft was ordered as the wide-body replacement for 777-200. And in 2016 we looking into purchasing a suitable replacement. Currently the 787-8 was flying routes across the world and we thought of operating them. But when Airbus announced the A350 we were interested mainly because of its size. It was way larger than the 787 which meant we could have more seats and make more money on routes. So after discussing and debating about the decision we decided to go to Airbus and purchase 20 Airbus A350s set to arrive sometime in 2018. After purchasing the fleet; we started to design an interior that would make this aircraft one of the luxurious in the fleet. (Second after the flagship A380) We decided on the design used today which is 8 Premium First Class seats, 24 Business Class seats, & 297 Economy seats. Option 2 would be 2 Penthouse seats, 8 First Class seats, 28 Business Class seats, & 231 Economy seats. (And in addition with a small cocktail bar for First Class and Business Class passengers) Both also contained the interior design on a diamond pattern on the walls and roof of the aircraft all illuminated by a LED lighting system with a purple hue (color seen on the engines.) Anyway, in 2018 the first aircraft arrived. And it quickly became the craze of everyone. Many travel reviews and travelers marvelled at the innovating seat designs and the aircrafts comfort. And later in 2019 the first aircraft (decked out with the second interior layout) arrived. And the new cabin layout and comfort made this aircraft the prime choice of business travelers flying into Doha. (Plus the travel enthusiasts and their youtube channels)

not feeling this one chief

This is an interesting concept and is an improvement from some previous work.

- The tail logo which looks to be a star and a camel? I sort of understand your inspiration but maybe it could be better executed; i.e. a larger, stylized camel with stars in the sky could be an interesting starting point;

- The kerning on the text is uncomfortably wide and  I think a better font could be chosen. I also recommend moving the Arabic up a little bit from the windows for better legibility.

Mashallah brother am a big fan of you'r work

Howver please remove the cock-tail-bar it is quite sinful,. . not halal

Mashallah brother am a big fan of you'r work

Howver please remove the cock-tail-bar it is quite sinful,. . not halal 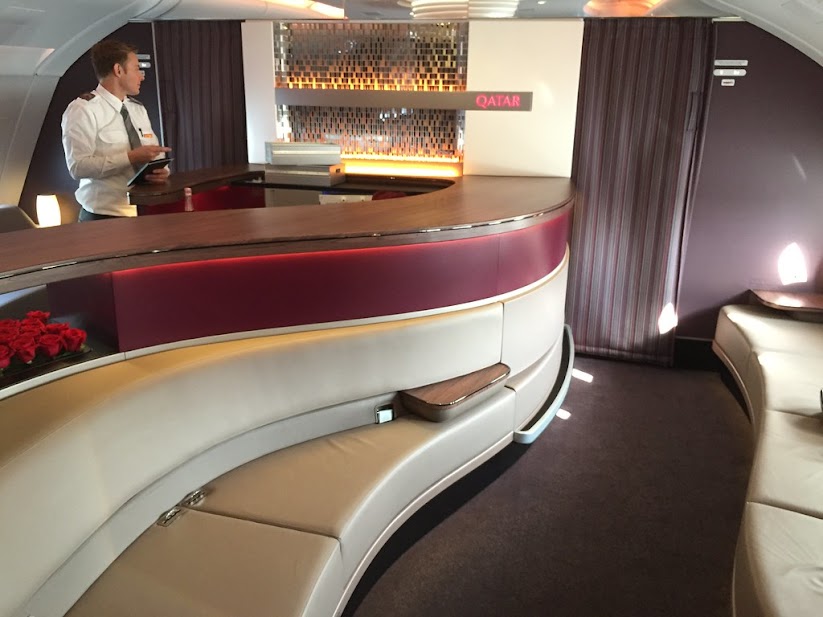