The Republic of Koquwa and all related © AirplaneNiner 2020, 2021. Map courtesy of Google Maps 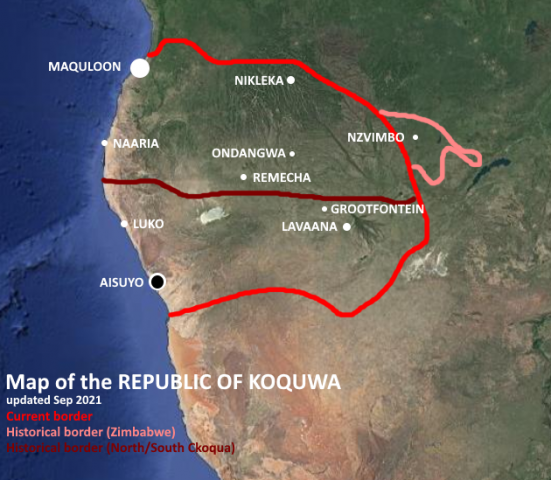 Disclaimer: This region is purely FICTIONAL, and none of it is real. Any similarities are purely coincidence. Even the language is gibberish mixed in the style of African Bantu languages, but it may mean something in a completely unrelated language. Please don't roast me over this country, I literally thought it up when I was a kid, and added more to it over time.
Edit: Changed names to sound more African and less gibberish.
Edit 2: Updated map

(Note: Grootfontein and Ondangwa are real cities of Namibia)
The current border with Namibia, Angola, Zambia and Zimbabwe is shown in red. The former Koquwan city of Aderdyne (adder-dee-neh), as well as the former border that led up to the city, is shown in pink - the city and land were handed back to Zimbabwe in 2017, and renamed "Nzvimbo" (nz-veem-boo), Shona for North. The former border between North and South Ckoqua, that ran from 1927 to 1997 is shown in brown. Easue (now Aisuyo) was the capital of the South, and Maquloon of the North.

Koquwa is a multi-party parliamentary democracy, and the country's president is Edward Mahlobo, the leader of the National Freedom Front (NFF), who has been president since the last general elections held in May 2021. The next elections are to be held in May 2025. Koquwa's economy is mostly made up of gems and exportation. It is one of the fastest growing and technologically advanced countries in the world, having a population of over 19 million people (2019).